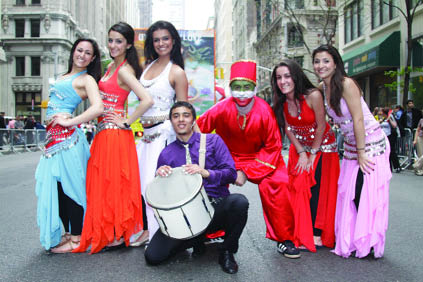 The Ninth Annual Persian Parade, was held on Madison Ave between 38th and 27th streets in NYC, on Sunday April 15 at noon with the Mountain horse policeman holding the Persian historical flag of “Shir va Khorshid”, which was followed by the Zoroastrian group, the historical spiritual roots of Iran.

This year the organizers focused mostly on the four seasonal festivals: Nowruz, Tirgan, Mehrgan and Yalda. Floats were created to illustrate the four festivals. Nowruz: The Persia Culture house directed by Mrs. Elahe Amiri preceded the Nowruz  with their breathtaking performance of Nowruz Khani. The Nowruz  Spring festival float was designed by Mrs. Mehri Radfar and consisted of seven heart shaped wreaths decorated with Haft seen items and positioned around a mirror to make a flower pattern. The float had paintings of the Achaemenid soldiers offering Haft seen blessings and also a Persian girl wishing everyone a “Happy Nowruz”.

Tirgan: The summer water festival was placed on the Gilan and Mazandaran float which are the beach states of Iran, across the Caspian sea. This float was designed and fundraised by Taskindoust family and the dance group Rana was choreographed by Mrs. Atieh Taskindoust.
There were paintings of Massouleh and waterfalls and also the picture of the National hero, Arash Kamangir, who set the borders of Persia with his strength in archery.

Mehrgan: The fall harvest festival in Appadana float was decorated with the sunflowers, wheat, pumpkins and nuts , and also a mirror symbolizing Mehr, the sun goddess. There were paintings of beautiful Persian memorial of Hafez in the autumn and other historical architectures in Shiraz. This festival also celebrates another hero, Kaveh Yalda: Winter Sun festival, the longest night of the year is traditionally the time for celebrating rebirth of the Sun and victory of light over darkness. Mithraism spread its wings from Persia to the ancient-civilized world in Rome and many European countries. Consequently, in Europe as in Persia, the 21st of December was celebrated as Mithra’s birthday. Early Christians took this very ancient Persian celebration of Mithra, the sun-god, and linked it to Christ’s birthday. Most importantly, ancient Persians also decorated an evergreen tree called SARVE. The SARVE or “Rocket Juniper”, also known as the cypress tree, being straight, upright and resistant to the cold weather, was known as a symbol of enduring hardship, thus appropriate for celebrating Mithra.
The younger ones had their “wishes” symbolically wrapped in colorful silk cloth and hung them on the tree along with lots of offerings for Mithra in the hopes that he would answer their prayers.
Diana  Artemis, the beautiful performer from Persia Culture house was dressed all in white dancing  to beautiful song of Laila Forouhar everyday is Nowruz. A large group of performers from Tajikistan  also add so much beauty and help us collectively greet these holidays. The Children’s Float: The Children’s float has Mehr school and has a performance of Ghashgaii dance by Ferdowsi school. There is a big rainbow giving the message Persian Gulf Forever. The Persian Cat says Persian is beautiful. There is a painting of Zoraster giving message of Good words, thoughts and deeds to our children.

Khuzestan: Managed by Mrs. Nikfal, the float was designed with orange sunset colors and petroleum fields and has a painting of memorial of Yaghoub Lace, another one of
our national heroes. A group of Bandari performers from GMU brightened up the float.

Kurdistan: The PAAIA organization marches along with the Iranian physicians and Iranian Bar Association, lranian American alliance. The Kurdistan float is preceded by the Julia Kulokova Dance Academy and is decorated with a gorgeous painting of the natural resources of
Kurdistan and has a horse in the center of the float. It was managed by Ms. Betty Emamaian and Ms. Shahin Samouhi Youssefzadeh and Ms. Nancy Donin.

Khorassan: There is a very large group under the coordination of Mr. Zarandazchi, who carry two large flags across Madison avenue, both historical flags of “Shir va khorshid” and Derafsh Kavian. They had numerous flags and jackets that had the name of Iran in old Achaemenid script and a message saying” l am Kurdish, Azari, Lori, Turkman, Balluchi, Bandari, Gilaki, I am Iranian”.

This group drove down in the early dawn to show their presence and support for our culture and cause. The Khorassan float had a picture of Rumi in the background and the book of Kings from Shahnameh. There was a twenty-five member band of Daf and Dombak drum players on this float.

Pari dar Jangal: A marching band playing the National anthem of Iran and US, was followed by the IAS banner and The Pari dar jangal float on which the human right activist and award winning actress Ms. Mary Apick was responding to her fans.

Esfehan and Yazd: which was designed by Mr. and Mrs. Vossough, had the thirty three bridges on the wall and the paintings of the  pomegranate gardens of Yazd, the pearl of the desert. The Armenian dance group Akhtemar performed a dance from Bokhara.

Zoorkhaneh: the Zoorkhaneh float has had the honor of having the legendary Ardavan Mofid and his nephew Tahamtan Mofid, teaching the GMU students how to do a sample of Persian Martial Arts in the streets of NYC.

Azerbaijan: The Azerbaijan float which was designed and managed by Ms. Zoya Kaffaii, had Shah Goli in the center with the painting of eagle and lion faces blended into one , done by the talented artist Babak. His website is www.BaK2design.com. The Azari dance group Soydash danced beautifully. BIBA: Sponsors and organizers of the BIBA float had traveled half way across the world from Great Britain to participate and support the Persian Parade. Their support has made the parade a universal endeavor and Mr. and Mrs. Babak and Ladan  Emamian along with Betty
Emamian have strengthened the parade . The GMU Modern dance performers managed by Mr. Kayvan Khaledi were spreading joy and pride about being Persians.

Tehran: This float had the Shahyad or Azadi tower in the center with the doves carrying messages of freedom of speech, women and freedom of thought . The first amendment of human rights engraved on the Cyrus cylinder was displayed on this float to remind us that we are all the
children of Cyrus and should therefore act in the same manner. There was a peacock under the tower and the GMU Baba Karam performers entertained the crowd.
The last marchers were the soccer group organized and directed by Dr. and Mrs. Tafreshi with T-shirts saying “I am Iranian”. “Our gratitude to Mr. and Mrs. Deldar Rom, Appadana TV, and all the other Satellite TV stations, Mr. Atabai, Mr. Shajareh and Mr. Homayoun, Mr. Mokri and Kamyar from  DJ Polka for his wonderful music along with  film recording of Mikhake Noghrei, Joseph DJ, Mr. Shahin Ensanyat and Mr. Imam Barkhordari  from PAIIA, and Shabe Jomeh for their hard work. To all of the board of trustees and Board of directors, our president Mr. Mofrad, and all of the board.
There are so many unmentioned names who worked so hard not expecting anything in return. This year our parade was widely covered by NBC, CNN , Post and many other American medias.

“Let us honor these manifestations of the collective unconscious, so that we may be the keepers of light, love, friendship and peace among the peoples of the world. As our own revered teacher and great Persian poet, Molana Rumi suggests: ‘Open up your hidden eyes and return to the root of the root of your own Self.’

We also thank Mr. Mehdi Zokaei from Javanan Magazine for his kindness and generosity.”