LOS ANGELES- On Nov. 8 over 250 guests and supporters gathered in Los Angeles for the “Save the Arts” Fundraiser with live performances by Christina Perri, America and SussanDeyhim. The live auction was a success and included a guitar by Guns ‘N Roses lead guitarist Slash that went for $5k, and ZZ Top and Aerosmith guitars went for $4k each. Photographers Neal Preston and Danish Saroee displayed their art, and prints were also on display by Shepard Fairey. Three schools were adopted that night, including one by AsaSoltanRahmati (“Shahs of Sunset”). They are still tallying the totals, but there was significant amounts raised that will help keep arts education in a number of LAUSD elementary schools for this next year. 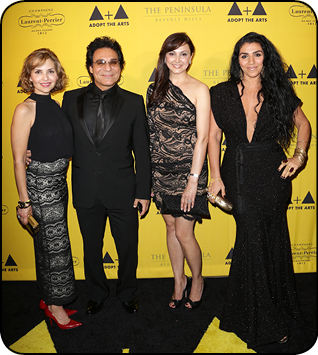 The Cocktail Party and Live Auctioncelebrated the organization’s partnership with renowned philanthropist Bita Daryabari (founder and executive director, Pars Equality Center) as the newly appointed International Arts Ambassador to Adopt the Arts, and featuredspecial performances by Christina Perri (“Jar of Hearts”), America (“Horse with No Name”) and other guests.

According to Los Angeles Unified School District (LAUSD), 50% of the children in the districtare not receiving arts education. As in many school districts around the country, LAUSD has been slowly eroding its commitment to arts education, reducing the budget incrementally. The district also estimates that 80% of its 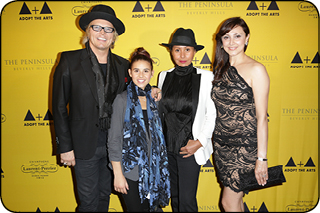 student body is living at or below the poverty line, which means the vast majority of these elementary school children will not have access to the arts outside of school either.

Due to our state budget crisis, there are less and less arts classes (ie. visual art, instrumental or vocal music, dance, and theater)being offered throughout the district’s 535 elementary schools. All scientific studies show that an education rich in the arts enhances academic performance, improves school culture, mitigates truancy and tardiness, and is instrumental in fully developing the young mind.

Adopt the Arts co-founder Abby Berman says, “Adopt the Arts was born out of the frustration for my own children losing education in the arts. When the system is failing, we have to take action. With influential people like my co-founder Matt Sorum adopting schools, we can preserve this valuable component to childhood development, which is also known to boost test scores. Because Federal and State funding is falling short, the responsibility is upon us as concerned parents and citizens to ensure that we are raising a new generation of healthy and fully developed individuals.”

Funds raised from this event will buy art units for LAUSD schools. Just $12,000.00 will purchase a semester of art (one day per week) for an entire school. 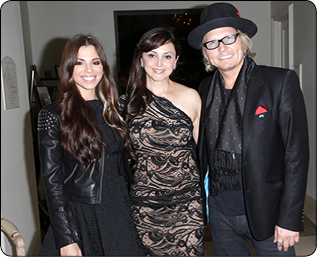 to start in our own backyard here in LA, and we will continue to adopt schools across the nation. We believe that art is a universal languagethat unites us all, regardless of our backgrounds. For this reason, we are appointing arts advocate Bita Daryabari as our International Arts Ambassador. We will be working closely with her to develop programs that bring a multicultural and world view to these invaluable arts programs.”

Newly appointed International Arts Ambassador Bita Daryabari says, “Arts are the ultimate source of educating our minds and healing our souls—bringing cultures together and showing our children the shared heritage of our humanity. In my philanthropy work, the arts, children, and dispelling stereotypes are closest to my heart, and in my role as International Arts Ambassador for Adopt the Arts, I hope to help further the urgent cause of maintaining and improving art education for our children, and thus, help create a more tolerant world.”

The event benefitted the funding for arts programs in LAUSD elementary schools. Adopt the Arts aims to raise $1,000,000.00 in 2013.

Founded in 2010, Adopt the Arts Foundation brings together well-known artists, public figures, and the general public to save the arts in America’s public schools. Co-founders Abby Berman and Matt Sorum believe that it is morally and ethically incumbent upon the public-at-large to foster the creativity, dreams, hopes, and imaginations of our children. Adopt the Arts is dedicated to improving the academic performance of every child through the gift of making art and music available to public school students. In 2011, Adopt the Arts chose Rosewood Avenue 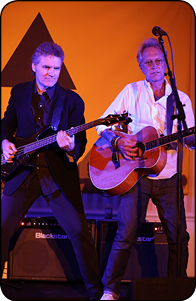 Elementary(West Hollywood, CA) as its pilot school, working directly with the principal and the booster club to ensure that the students receive exposure to all the arts disciplines, including music, dance, theater, and visual arts. Adopt the Arts is supplementing the salary of the music teacher and has outfitted a music room with donated keyboards, guitars, and drums. With the help of the arts education branch of LAUSD, Adopt the Arts is identifying the most underserved schools in the district as it prepares for its next series of adoptions. InSeptember 2012, Adopt the Arts donated 1,000 musical instruments(ie. drum kits, keyboards, guitars, bass guitars) to LAUSD elementary schools. Each school site is available to be “adopted” by anyone that wants to help—whether a business, a working artist, celebrity or public figure—to underscore the importance of community involvement.(adoptthearts.org)

In less than a decade, arts advocate and philanthropist Bita Daryabari has emerged as one of the most beloved and cherished leaders of the Iranian-American community. From the beginning of her professional life, her work has been accompanied by her avid interest in the world of literature, poetry, paintings and sculpture. She created the Bita Daryabari Endowment in Persian Letters at Stanford University, where The Annual Bita Prize in Literature has become the most coveted prize in the realm of Persian letters. On Nov. 29, the Fifth Annual Bita Prize for Literature at Stanford University will be awarded to Mr. HoushangSeyhoun. HoushangSeyhoun is a renowned artist and architect known for his significant contributions to a new aesthetic of Iranian modernity and urban modernism. 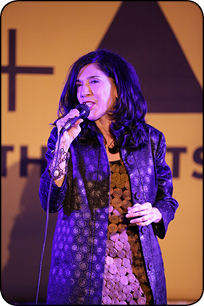 In 2010, she founded Pars Equality Center—the only non-profit providing social and legal services to Iranian emigrants, refugees and asylum seekers—in the Bay Area where she is also the Executive Director. Her Unique Zan Foundation is dedicated to supporting the education of women all over Asia—from building orphanages for Afghan children to schools in the Middle East.Honors include Golden Gate University’s Alumni of the Year Award (2008); PAAIA Philanthropist of the Year Award (2010); United Nations Appreciation Award for Outstanding Leadership, Commitment and Support of the UN and Achieving the UN Millennium Development Goals (2011); and Ellis Island Medal of Honor (2012). Bita Daryabari’s multi-faceted philanthropy is founded on her simple idea that creativity is the only way to alleviate suffering and ennoble our minds and better comprehend the human condition.

No question but the painting of Jenik Cook – and hardly less the work she realizes in other media (most notably ceramics) -is abstract-expressionist. But it is not necessarily Abstract Expressionist. That is, however much it may evince the DNA of mid-century American “action painting,” or even European counterparts such as tachism, l’artinformel, or CoBrA, Cook’s art only incidentally revives the method, much less the look, of these bumptious, scrappy art movements. Rather, to power her vision, she goes back to the roots of gestural modernism, finding dancing line, elastic contour, and fervid color in surrealism, in fauvism, in expressionism itself. The painting of Pollock and Kline, and of Fautrier and Jorn, gives Cook permission to work 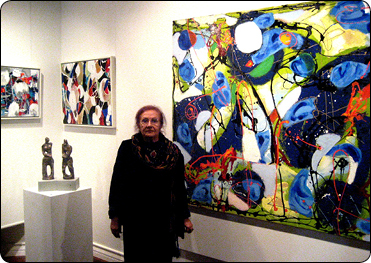 unfettered like this, and gives us the context to comprehend fully – even to empathize kinesthetically with – what she does. But she is not emulating, much less imitating, Afro or James Brooks in her graceful, muscular paintings on paper or rehashing Sam Francis or André Lanskoy with the rhythmic clots and scatterings of pigment that collect on her canvases (well, on a wide variety of more-or-less canvas-like support material). Look instead to Miro, Masson, Marc, or Münter, Pechstein or Picasso, Marcks or Matisse, for Cook’s sources.

Indeed, look into Cook’s own cultural heritage. The line that whips and loops throughout Cook’s oeuvre, whether hurling forms across canvas expanses or tracing them on the sides of pots, whether describing slashing trails of pure pigment or the sinuous contours of human bodies, is no more a painted line than it is a written one. It is made less with the whole body – although one can sense a change of stance, a hip motion, in so many of these dancing whiplashes – than with the whole arm. These gestures issue from the wrist and the shoulder. They are in fact as much inscribed as painted. Their energy is not just telegraphic; it is calligraphic. If the vivacity of the image bespeaks Cook’s Armenian blood, the rhapsodic curvaceousness of her line betrays her Iranian childhood. As comfortable 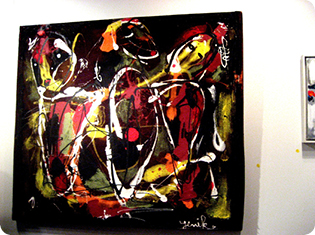 speaking and writing Farsi as she is Armenian, Cook marries her disparate cultural sources -which of course now include the western European and American influences of her adult life – into an aesthetically cohesive mix with a surprisingly broad formal reach.

Perhaps the breadth of that reach, given the variety of sources, isn’t actually so surprising. But it is always a bit startling to witness – that is, to be allowed to witness – an artist master such a conceptual and expressive range. Most artists have this range in them, but so many suppress it. For her part, however, Cook refuses to suppress her stylistic multivalency. Not only does she not limit her vision, but she uses that vision very consciously to drive her artmaking in as many ways as it needs to go. She may edit, but she does not self-censure. Her style, ultimately as coherent and personal as a signature, emerges from and among her plethora of approaches, approaches which themselves spring from her persistence, her prolific output, her knowledge of art, and her irrepressible verve. Jenik Cook’s art springs forth -in several directions at once.