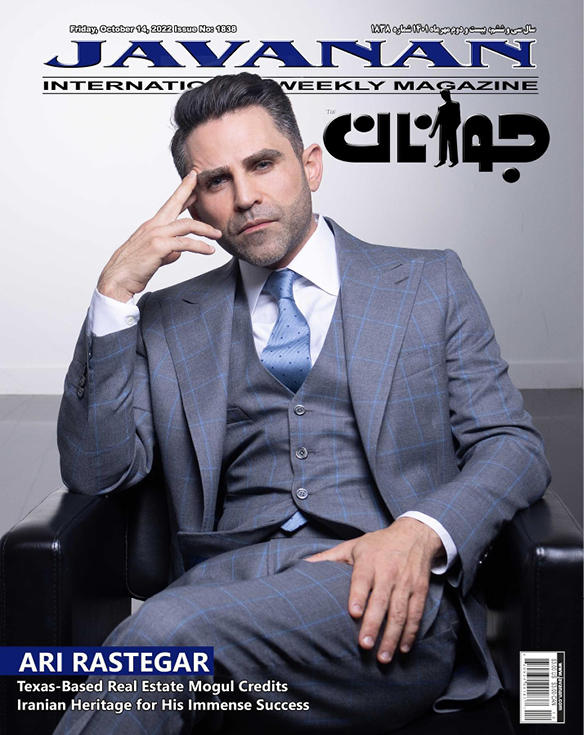 I first discovered Ari Rastegar in the spring of 2018, while on a business trip in Dallas, Texas on a morning walk. Later I was pleasantly surprised to learn that “Ari” was actually an Iranian-American, proudly born Ariah-Hossein Rastegar. I found myself walking around Dallas’ premier Uptown neighborhood, home to Klyde Warren Park, the iconic Ritz Carlton and some of the highest real estate prices per square foot in Texas.

Halfway through my stroll, I passed a triangular parcel that sits on an half-acre island land lot that instantly reminded me of the world famous Flat Iron Building in New York City. It is at the apex of a four road intersection just a block from Goldman Sachs’ massive future campus and one of the largest SalesForce offices in the country outside of Silicon Valley.

What caught my attention was the unique signage around the McKinney Avenue property. Instead of typical fencing, I found sturdy wood wrapping the full perimeter with black metal signs that reminded me of art more than real estate. With the Rastegar logo stacked with an originally adapted eternity knot, which means “the marriage of divine wisdom and human measurement,” was a Pablo Picasso quote that read: “Everything you can imagine is real.” Yes, McKinney Avenue has been dubbed the “Park Avenue” of Dallas, a reference to New York City’s 843 Acres of green oasis, but 1899 McKinney Ave. was far from glamorous, with a dilapidated building that was abandoned and very likely housed some unwelcome inhabitants along with overgrown grass. With all the skyscrapers around it, this appeared to be the last piece of undeveloped land that more resembled a missing tooth within a beautiful smile of building around.

I incorrectly assumed because of the prestige and location, location, location of the property that it was owned by a massive legacy institution, likely run by a handful of septuagenarians, but it was actually owned by one-man; one Iranian man – Ariah-Hossein Rastegar attorney, 37 years at the time –  half-German, Half-Iranian who had in fact founded and is sole owner and CEO of Austin, Texas-based private equity firm Rastegar Property, which control 100’s of million of dollars in real estate assets, and had successfully invested and exited in over 38  cities, 12 states, and seven different assets classes. This property at 1899 McKinney Ave. – unbelievably – was just one asset in his expansive portfolio. His investors are public pension funds, family offices, insurance companies and of course, high net worth investors that believed in him, smartly so, early on.

“It means everything to me to be Iranian and showcase my family name to honor my ancestors and future generations.” Rastegar explained during a recent zoom interview conducted by yours truly. “Rastegar in Farsi means ‘saved by God,’ and for me, I feel like you don’t really know where you are going in life unless you know where you came from. And I truly live by that.”

Much of Ari Rastegar’s identity was created by the Rastegar family patriarchs, specifically his father and grandfather, and his success is fueled by knowledge of the plight of his family during the Iranian revolution and the need for them to leave their native Iran behind.

“I remember my father telling me at a very young age that I would never see the Iran he knew and the one him and my grandfather grew up in,” Rastegar recalls. “Because of that, it was imperative that I learn the culture, studying Rumi, stories of Rostam as a 7-year-old kid, learning to speak the language of Farsi fluently despite being born in the United States… all of that dramatically shaped how I see the world. In the best ways possible.”

Rastegar’s grandfather was a Renaissance man in his own right, working with the palace and often the Shah himself and was among the first licensed psychiatrists in the country. He later worked as a professor in the American university in Tehran, where he taught history and French. He was also a world-class track athlete, something that resonates with Rastegar to this day: he takes over 100 vitamins a day and stays in tip-top shape. He instilled in a young Ari many values and dispensed many pearls of wisdom to him throughout Ari’s youth. However, Rastegar realized the dose of painful reality was so hard, for his grandfather and many Iranians alike, to swallow when he had to leave Iran and start over in the U.S., living in a small, two-bedroom apartment in Dallas.

“I wanted to be a doctor like my grandfather was, but my grandfather wasn’t happy, and told me that in order to be successful in America – the land of opportunity – I had to be a businessman,” Ari remembers fondly. “He equated owning property with being rich. He would take me on walks in downtown Dallas and show me these big buildings, and he told me to buy them! And when I bought all of them, he told me to go to Iran and buy all of our family land and properties back.”

Rastegar’s path to becoming a real estate tycoon wasn’t exactly linear, but he didn’t want to let his father or grandfather down. His grandfather impressed upon Rastegar pride for the family name, and made Ari promise him that when the day came, he would put the surname on the wall of the conglomerate massive business empire he would one day build.

Rastegar graduated from Texas A&M University with highest honors and a degree in English literature, and then attended law school at St. Mary’s University, subsequently passing the bar and briefly becoming a criminal defense and entertainment lawyer. But while in law school, he borrowed $3,000 and started dabbling in real estate between classes. After a short stint as an attorney – “I was undefeated in the court room during my 9 months practicing,” Rastegar recalls – he relocated to Manhattan to partner with  Anthony Orso, a NYC real estate legend, to start and run a global event hosting venture in 2010. Two years later, he began investing in properties because of relationships in NYC and he eventually returned to Texas in 2014 to spearhead what is now Rastegar Property. Involved in a billion dollars in construction later, Rastegar now is among the most successful real estate developers in the country.

But what about that piece of land on McKinney Ave in Dallas that caught my eye in February of 2018?

“That land site is going to be the preeminent piece of real estate in Texas, hands down,” Rastegar explains. “This brand that is partnering with me to do it, it is among the best in the world, bar-none.”

Rastegar told me about the partnership off the record. My jaw dropped immediately.

To say that Rastegar is bullish on the prospects of Texas real estate would be an understatement. His focus is currently on the plethora of holdings his firm maintains in Austin, which are comprised of hundreds of acres, including 600,000 square feet of industrial developments near the new Tesla Gigafactory. The kicker? Rastegar owns 100% of his company at the corporate level.

In 2021, Rastegar was named among the Top 100 Most Powerful People in Real Estate in the world by the Commercial Observer. The 40 year old was the youngest inductee in history based on my research. But the more you praise Rastegar, the more he reminds you that his success is a family affair. Rastegar’s family and success is buoyed by the support of his wife, Kellie, as well as his three children, Isabella (2 years old), Kingston (7), and Victoria (9). The pride he has for his family name is the essence of his identity and he loves America with all his heart, while honoring his rich heritage.

His surname is also plastered across the front of thousands of youth soccer club jerseys that outfit the future Cristiano Ronaldo’s that play for FC Westlake, a youth nonprofit entity in Austin that serves thousands of soccer kiddos, including Rastegar’s own offspring, and for which Rastegar serves as the largest benefactor. It is a partnership  with Adidas.

Youngest brother Gabriel Costello is a musician, and middle brother Nicholas works on the private equity side with Ari at Rastegar Property. A quick glance at Rastegar’s Instagram account also provides a peek into the many celebrities, athletes, scientists and intellects and he counts as friends. From NBA players like Kristaps Porzingis to rappers like G-Eazy and NAV, all the way to television personalities like Jalen Rose. Rastegar works with those in his close inner circle, interviews them for his podcast, and leverages their notoriety to plant a seed for future generations of Iranian-American moguls who may be reading this article in their college dorm rooms, whether in Los Angeles or London and hopefully in Iran. His latest book, The Gift of Failure, is now a Wall Street Journal International Best Seller ranking in the Top 5, and an Amazon Best Seller in a slew of categories. It is currently available online at Amazon or in Audio format.

“I want to be able to say that as a 1st generation American who wasn’t supposed to make it, any success I’ve had is because I care deeply for those I serve and the work I do is motivated to solve problems, enhance communities and add value in a win-win model in all my actions and business dealings,  Rastegar says. “I want to be able to help anyone from the younger generations achieve what I have… and if I can do it, so can you.