A NIGHT OF TRIBUTE TO TOOFAN BECOMES A NIGHT OF FAREWELLS 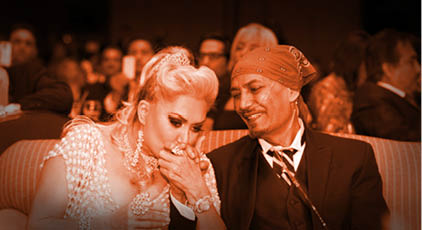 A NIGHT OF TRIBUTE TO TOOFAN BECOMES A NIGHT OF FAREWELLS

Last week singers and friends gathered in Los Angeles to pay tribute to singer Toofan, as he watched from beside the stage.  They didn’t know that the memorable evening would be the last time they would see him.

Toofan, who had been suffering fromlung cancer,passed away early Tuesday morning at Cedar Sinai Medical Center in Los Angeles. He was said to be looking forward to the tribute that brought together close friends, fans and fellow performers at the Universal Hilton on the evening of May 31. Javanan Magazine helped promote the event, along with other Iranian media and celebrities.

During the last year of his illness, singer Kian Pasha and his wife brought Toofan into their home and took care of him there. Kian also helped with the tribute event and also shared the stage with Pyruz, with who he sang songs.

Singers in attendance the night of the tribute included Ebi, Shohreh, Leila Forouhar, Andy, Korous, Hengameh, Helen, ShahramShahpareh, ShahramSolati, Farshid Amin, Moein and comedian Michael was the emcee. Singer Dariush made a speech in which he suggested singers gather and create a singer’s society for anyone in their industry who needs help, medical help, and assistance. That the society would help with resources. “We need to join hands and create something like this,” he said. He announced that they should get the help of Javanan, who would reach out to everyone they have worked with, and start there.
Other singers gathered and sang songs on stage together for Toofan. Songs included the Iran national anthem and songs of Toofan himself.

Nobody expected that it would be a night of goodbyes.

It was almost as if the well-known singer knew thought that this would be the last night he would see them, friends said.
Close friends also said that he gathered all his energy to be there that night and to stay until the end of the event. He laughed and sang with his friends, and said he was humbled by their presence.

The next night, Toofanwas admitted to the hospital after not feeling well.

He was at the hospital for a couple of nights before slipping into a coma, then the news came that he passed away early Tuesday morning.  Dr. Youram Nassir was Toofan’s doctor at Cedar Sinai and it was reported that he took very good care of him, even accompanying him the night of the event, where he sat next to the singer. Dr. Nassir said that he would gladly assist singers in the future if they needed his help.

Toofanwas married twice and had a son with his first wife. His name is Ramin and he now living in Texas. During the last few days, he came to see his father.

The singer was also married to Iranian singer Mina (Alaleh). They eventually got a divorce but remained friends and stayed in touch for many years.

Toofan was born in Iran and started playing guitar at age 17, working with Iranian singers, including pop singer Googoosh. He started a band with Nasser Cheshmazar, with whom he recorded the famous track “KhodayeAsemoonha”.  After the revolution he worked and lived in London where he would perform in the clubs.

Toofan then moved to Los Angeles in the 90’s where he performed in concerts, clubs and special events. He released several albums including “BalehBaleh” and “Be Hamim”. Hewrote songs for other artists, and became good friends with other Iranian singers and musicians, many of whom had a chance to voice their affection and appreciation for him the night of the tribute.
Toofan’s videos are being viewed by fans all over the world this week.