Javanan Magazine Editor-in-Chief meets with FBI SAC Voviette D. Morgan as she tells our readers what the FBI stands for, their relationship with the Iranian Community, and about being a woman in a male-dominated career.

Special Agent Morgan: We have jurisdiction for all federal crimes. So, for example, some of the programs that we focus on that are extremely important are public corruption where we investigate police corruption, law enforcement corruption, legislative and judicial corruption- we, the FBI, are primarily responsible for these type of investigations. Public corruption is very important to us because it’s one of the only investigative matters that is primarily the FBI’s responsibility. We investigate all white-collar crimes from healthcare fraud to financial institution fraud.
We also investigate organized crime and drug matters, along with our partners from the DEA, ATF, CBP and local law enforcement. The gang problem here in Los Angeles is also a huge threat. So, we work gang matters with our local and federal partners. Los Angeles is really the gang capital of the world. So we have a lot of task force operations with our state, local and federal partners. We also investigate civil rights violations and human trafficking. Those programs are very important to us. To protect people’s civil rights on a dailybasis and mitigate Human trafficking efforts are two extraordinary tasks we are focusing on.
This all falls under the criminal umbrella, but again, I just wanted to highlight what were doing on the gang front, the drug front, organized crime, public corruption, civil rights, and healthcare fraud, especially with the recent opioid crisis, this has become a very significant issue that we’re looking into. All of those programs are part of our criminal division.
MZ: Most of the people I know that have asked about your background and what you like to do in your free time.
Special Agent Morgan: What I like to do in my free time? Ha, ha. Well my background is interesting. I mean, as I sit here in front of you, I am the only African American female holding the position of Special Agent in Charge in the FBI. A part of me is proud to say that and a part of me hates saying that because I wish there were more African American females in senior executive positions within the FBI.
We are working in the FBI to become more diversified. We need more African Americans, we need more Latinos, we need more Asian Americans, we need more Persian Americans, and we need more Muslim Americans to be part of the FBI. So, sitting here as the only African American Special Agent in Charge is a privilege and an honor. However, it also tells you I have a lot of work to do. I have a lot of work to do to recruit more people of diverse backgrounds, because I’ve got to leave this organization better than I found it. I think diversity within the FBI makes us more effective, and I’m very passionate about making the FBI a more diverse environment.
Right now, in the FBI, about 20% of the agent population is female, which is actually our highest rate thus far. So, that’s improving. We just need more people of color in the FBI, and that’s something I’ll be working on. 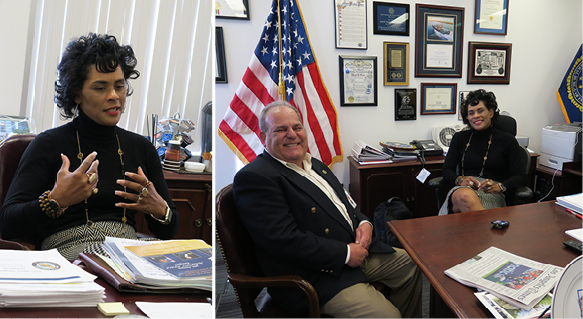 As far as what I do in my spare time, you know, being born and raised, here, in LA, I love the entertainment industry-I love movies. I love going to the movies in my spare time. I’m also a big water person; I live near the beach, I love sailing. I like running along the beach- I’m a big advocate for jogging and running. Exercise! So, I do a lot of running. And, in my spare time, I try to spend as much time with my family as possible. I’m very family-oriented. I have great parents. My father has passed away, but my mother is still living so I spend a lot of time with her and my sister, who has 3 children. I spend as much time with my friends as I can, and try to travel a lot. I love to travel, that’s a big passion of mine.
Special Agent Morgan: I love traveling abroad- I’ve spent some time in the Middle East, a lot of time in Europe and in Asia. So, I’ve seen a lot of the world, and I love that. I think that helps my perspective of how we do business in the FBI, because I’ve been exposed to so many different types of people and cultures, and I’ve learned a lot. It’s been a privilege. I’ve had a good 21 years with the FBI, both personally and professionally.
MZ: 21!
Special Agent Morgan: Yes! 21! January 5th of this year marked 21 years.
MZ: As a woman in the FBI, what can you say to young women who want to follow this path, maybe to this job in the FBI.
Special Agent Morgan: Well, I tell everyone, but, especially, young women to look at jobs or careers- opportunities- that are non-traditional. Technically, law enforcement has been a mostly male-dominated career, but I tell ya, it’s one of the best decisions I’ve ever made. Having a career in the FBI, getting involved in law enforcement- it’s been very enriching. Women bring a unique perspective to law enforcement and doing what we do. So, I challenge young girls to do things they enjoy, do things they are passionate about, and look at careers that are typically considered non-traditional for women. I tell young girls to challenge themselves, try new things, get involved in areas that women aren’t often involved in, and see if they take a liking to it. But, I think women across the board need to be involved in everything- all aspects of politics and government. I believe women improve every area of engagement.
MZ: I believe that.
Special Agent Morgan: I do, too.
MZ: Did you always want to work with FBI?
Special Agent Morgan: No. A career in the FBI is something I never thought about. You know, as an African American, historically, my community has had a very interesting relationship with law enforcement. So, the FBI isn’t a career we would typically gravitate towards. I hope that changes. I think that’s the case with a lot of ethnic communities. Our communities are not necessarily comfortable with law enforcement, in general. But, I was lucky enough to meet an FBI agent after finishing grad school and he pretty much recruited me into the FBI. I had never thought about having a career in law enforcement. I went to UC Berkeley for undergrad and interestingly enough, I studied legal studies. I thought about being an attorney. I decided, that wasn’t something I wanted to do so when I graduated from Berkeley, I went to USC for graduate school and I got my Master’s in Public Policy and Public Administration because I love politics and I love learning about how governments are run. I also wanted to learn more about city management, city government, and federal government. I thought about the possibility of getting into politics, but, as I matured, I began working for the City of Los Angeles. I was a consultant, looking at water and power issues. I advised City Council members on water and power issues and, during that time, I happened to meet an FBI agent. If I hadn’t met him I probably never would have joined the FBI. He recruited me, and it’s the best decision I’ve ever made. It was really random, but that’s why it’s important to always recruit, to go out into communities and press the flesh. It’s good to talk to people- meet them face to face- because you can introduce people to a world they never thought about joining. And here I am, 21 years later, it truly has been one of my best decisions to join the FBI. 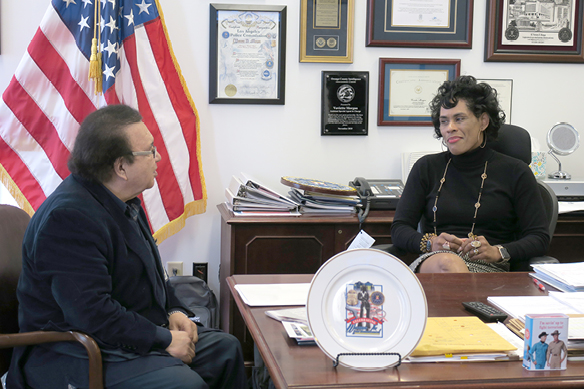 MZ: What’s the most rewarding part of your job?
Special Agent Morgan: Probably the most rewarding part of my job now that I’ve advanced up my career path, and a part where I think I am most effective, is fostering and maintaining partnerships. Working with our State, Federal, and local partners. We can’t do anything in the FBI without our partners. So, partnerships are important to me. I take a lot of pride in the professional relationships that I’ve been able to build, and working with the community. If you don’t keep in touch with the community, you’re going to lose touch with the community, and we can’t be effective in the FBI if we don’t have strong community partnerships. I also think that internally, with the folks that I work with, mentoring is a big deal. Trying to encourage our folks to be the best they can be, and making sure that once they get into the FBI, we’re constantly challenging new employees to grow, develop, and become better agents, analysts, or whatever their responsibility is. So, I try to mentor our folks as much as possible.

MZ: Who are your idols?
Special Agent Morgan: That’s a great question. You know for me, it’s very simple. I would not be here without my parents. My parents are my biggest mentors and my biggest inspirations. They’ve always let me know that I could truly do anything I wanted to do. And that sounds very basic, very cliché, but I grew up in an environment where I was very supported. My parents, interestingly enough, my father was a minister, and my mother was an educator – she was a Principal. She has since retired. But, I grew up in an environment where public service was important. Being a part of a community was important, and helping people was important. And, I truly feel that working with the FBI, qualifies as public service. We are public servants. But without my parents and the environment they created for me, I wouldn’t be able to do anything that I currently do. They were, and are, great people and encouraged my sister and I to do whatever we wanted to do, and develop a passion for life. Without them, I wouldn’t be here.
MZ: Thank you for your time.
Special Agent Morgan: Thank you very much!

Javanan thanks Aram Sardarian for his advisory role with the FBI for the Iranian community and for helping to make this interview possible.