Arsen Danielian had an audience with His Holiness Pope Francis

Longtime community leader Arsen Danielian, Esq., was honored by The Board of Supervisors of the County of Los Angeles for his dedicated service to community. On April 30, 2019, during the city-designated Armenian History Month. Kathryn Barger, Supervisor of the Fifth District, presented the certificate of recognition to Danielian, who was joined on stage by His Eminence Archbishop Hovnan Derderian, Arsen Danielian, Esq. in mid-March 2019 traveled to the Vatican to have an audience with His Holiness Pope Francis. The audience was graciously facilitated and coordinated by the Armenian Catholic Eparchy of the USA and Canada and the Ordinariate for Catholics of Armenian Rite in Eastern Europe. Mr. Danielian had the unique opportunity to personally express his deep admiration for His Holiness Pope Francis. His Holiness’ stand with the Armenian people and for the Armenian cause, and asked for His Holiness’ blessings. Prior to the audience, Mr. Danielian met with His Eminence Pietro Cardinal Parolin, Secretary of State of the Holy See in his offices in the Vatican. 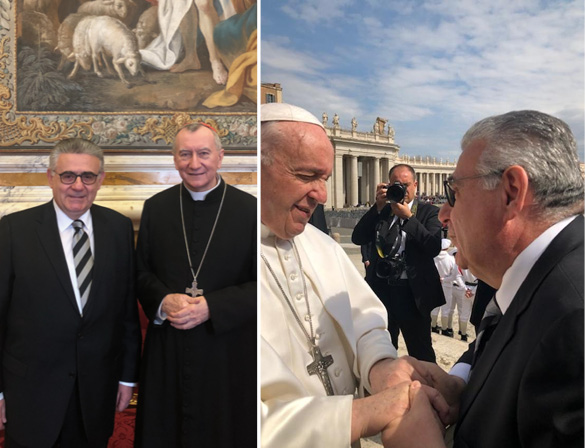