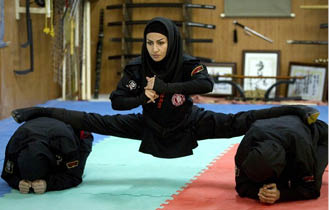 MODEST RECEPTION was awarded the NETPAC Prize at the Berlin Film Festival as the organizers announced the winners during the closing ceremony on Saturday.
The film, directed by MANI HAQIQI, is about a rich couple who distribute plastic bags full of money in the Iranian provinces. It was screened in the festival’s International Forum of New Cinema. Haqiqi attended the festival to promote “Modest Reception” during a screening of the film.

NETPAC stands for the Network for the Promotion of Asian Cinema, which was established by the Asian Film Quarterly under the auspices of the UNESCO in 1990.

Iran has been breeding Iranian FEMALE NINJAS. Well, sort of.
At a club in Iran, where the specialist form of martial art has become popular, more than 3,000 Muslim women perform gravity-defying stunts while training to become KUNOICHI (female ninja). NINJUTSU instructor FATIMA MUAMER told Iranian TV station Press TV that the sport increasingly appeals to women as it helps maintain balance between the body and the mind.
There are over 24,000 official members in Iran’s ninjutsu club. They have been practicing since 1989.
Sensei AKBAR FARAJI says, “Being a ninja is about patience, tolerance, and fortitude. Literally it means: the art of becoming invisible.”

EVENTS
[HOUSTON]
HOUSTON GRAND OPERA presents its 46th world premiere, The Bricklayer, March 15 – 21, 2012. Based on a short story by renowned Iranian-American author FARNOOSH MOSHIRI (The Bathhouse, Against Gravity), The Bricklayer tells the real-life story of a family torn apart by the Iranian revolution. The score is composed by Gregory Spears.

The chamber ensemble, led by Music Director David Hanlon, combines classical western instruments such as clarinet, violin, cello and harp alongside Persian instruments such as the Ney which will be played by KAMRAN THUNDER from the Austin based band, TEHRANOSAURUS.
March 15, Cullen Theater. www.houstongrandopera.org for info and tickets.

Filmmaker ABBAS KIAROSTAMI Workshops in Spain.
‘Kiarostami: A Look at Cinema’ aims to help filmmakers learn how to direct cast members and how to communicate with actors. The 10-day workshop, held along with the 3rd Ibn Arabi Film Festival, will kick off on February 28, 2012.
Several Iranian films are also scheduled to be screened at the festival including ALIREZA AMINI’S “A Petition for Allah”, ELIKA REZAEI’s “Once Again Memories I loved” and QASEM ANSARI’s “When You Get Lost”.  March 8 & 9 http://www.ibaff.com for info.

Fahimeh Amiri and Loné Vilnius exhibit mixed media assemblages at Art Barn in Salt Lake City, Utah.  Amiri’s exhibit at Salt Lake’s Finch Lane Gallery features a number of similar works, inspired visually by the artist’s training in Persian miniature, and by the struggles of women in her native country.
Amiri’s art “encompasses the subject of Islam and its influences on Iranian women with glimpses into their psychological and social relationships to Islam,” which is made lucid through meaning and metaphor in these rich narratives. Through March 2 (801) 596-5000  or www.slcgov.com/arts for info.

This March, QUEENS WORLD FILM FESTIVAL in New York will screen the Iranian animation “Once Upon a Time on Earth” by FAYYAZ BAHRAM during the opening ceremony. The one-minute animation spotlights the development of human civilization concerning damages it brought to nature.
The animation will compete in the “Occupy This” section of the film festival whic