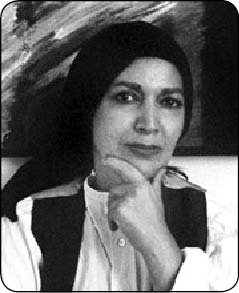 contemporary female artists in Iran and in the world, a translator and writer, Farideh Lashai died on February 24, after a long battle with cancer at the age of 68.
Fadrideh Lashai (Born in Rasht, 1944) was a multimedia artist. She had been painting more than forty years and having held 25 solo exhibitions and participating in more than 80 group exhibitions she was one of the most active Iranian female visual artists known.
She was a writer too and her last novel Shal Bamu, published a few years ago became a best-seller and attracted the attention of Iranian literary circles. Her presence in international art auctions together with her brilliant valuable works and her successes on a global scale has turned her into one of the most well-known pioneers of visual arts not only in the Persian Gulf region and the Middle East, but also in Europe and America.

Center for Iranian Music (CFIM) to “create opportunities that support and promote the appreciation of Iranian music and its rich history,” according to Reza Vali, associate professor of composition at the School of Music and director of education and research for the center.
Vali and Dr. Bijan Elyaderani founded the center to preserve and promote Iranian music, including traditional music (the Datsgâh System), folk music (regional music of Iran), contemporary music, and commemorative and religious music.

The grand opening will be held at 8 p.m., Thursday, March 7, in the College of Fine Arts’ Alumni Concert Hall. The center will honor the Master of Santoor (Persian hammer dulcimer) Dr. Dariush Saghafi for his contribution to Iranian music and his dedication and support of the Iranian-American community in Pittsburgh.  In addition, the opening night will feature performances by the renowned Carpe Diem String Quartet and Dr. Ramin Saghafi.

SJSU Presents: Classical Persian Music and Poetry Concert
Sunday, March 10 San Jose State University will be hosting a concert of classical Persian music and poetry.
The event is hosted by Persian Studies at SJSU and will feature Mahvash Guerami and Hossein Massoudi with guest poets Mojdeh Marashi and Najia Karim.
The concert will be held in the Engineering Auditorium 189 at 3 p.m.  Admission is free… sweets and teas will be available.

The works of celebrated Iranian artist, Ali Banisadr, will 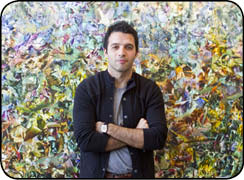 officially go on display from February 10 – March 11, 2013 at the Museum of Contemporary Art, Los Angeles (MOCA) as part of the museum’s permanent collection exhibition entitled A Selection of Recent Acquisitions.

Ali Banisadr’sIt’s in the Air (2012) was gifted to MOCA by ThaddaeusRopac. The Day of the Last Judgment (2009) by ShojaAzari will also be displayed during the month-long exhibition. Safe Haven (2011) by Shiva Ahmadi will be exhibited in an upcoming recent acquisitions exhibition that opens in March. Both works were gifted to the museum by Leila Heller and are now a part of the museum’s permanent collection as well.

Banisadr’s works are housed in prestigious public collections worldwide including the Metropolitan Museum of Art in New York, Museum of Contemporary Art in Los Angeles, the Saatchi Gallery and the British Museum in London, among others

7th Annual Persian New Year Celebration
NYC’s Persian Arts Festival, Inc. (PAF), an organization devoted to providing a platform for Persian artists and visionaries, joins forces with Le Poisson Rouge and other Persian cultural organizations to present a New Year extravaganza featuring Persian fusion from three of the city’s top-tiered bands.
The evening will be full of musical surprise and delight, featuring RanaFarhan’s unique blend of classic Persian poetry with contemporary jazz and blues, Vatan’s Persian-meets-country-rock sounds and a blast into the past with MitraSumara’s super group of New York City musicians that pay homage to the vibrant pop and funk music of 60s/70s Iran.
Visit persianartsfestival.org 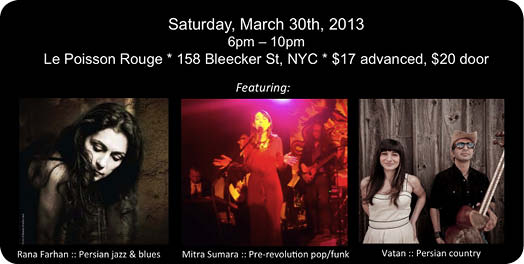