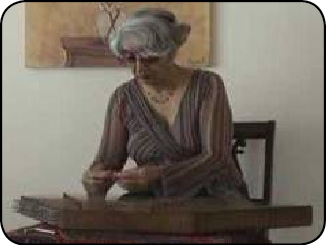 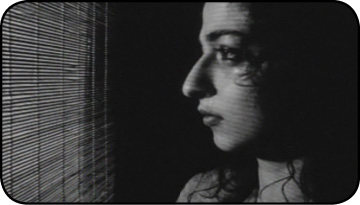 They are And We Pass By (Iran), Distant Words (Australia), Karbafi (Iran), Khourosh Ali Khan: Jazz Fusion in Iran (USA), Namaki (Iran), and Rostam in WonderLand – Sohrab’s Blood (USA).
More than seventy submissions were received this year from all over the world, including the United States, Canada, Iran, Nepal, Armenia, France, United Kingdom, Australia, and Bangladesh, all competing for top honors at Farhang’s 2013 Short Film Festival and an opportunity to win $10,000 (first place), $5,000 (second place) or $3,000 (third place).
This year, the screening of the top six films, an award ceremony recognizing the top three films, and an exclusive reception in honor of the filmmakers, with a red carpet arrival, will take place on Saturday, March 16, 2013 from 6pm to 9pm at the Leo S. Bing Theater in the Los Angeles County Museum of Art (LACMA) as part of Farhang Foundation’s two-day Nowruz festivitiesat the museum. Tickets for this special evening, co-sponsored by LACMA’s Art of the Middle East Contemporary and Farhang Foundation, are $35 for LACMA members and $45 for non-members.  To purchase tickets or for additional information, visit www.lacma.org or www.farhangfilmfest.org 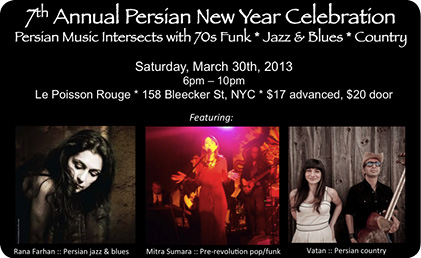 organization devoted to providing a platform for Persian artists and visionaries, joins forces with Le Poisson Rouge and other Persian cultural organizations to present a New Year extravaganza featuring Persian fusion from three of the city’s top-tiered bands.
The evening will be full of musical surprise and delight, featuring RanaFarhan’s unique blend of classic Persian poetry with contemporary jazz and blues, Vatan’s Persian-meets-country-rock sounds and a blast into the past with MitraSumara’s super group of New York City musicians that pay homage to the vibrant pop and funk music of 60s/70s Iran.
Visit persianartsfestival.org 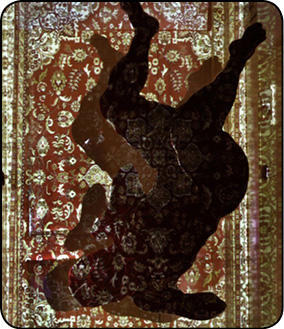 the focus of Opera Gallery’s upcoming exhibit, allowing visitors to gauge just how much the meaning of true art has evolved from the days of Persia.
The “Art of Iran” showcase features 30 Iranian artists, including works by celebrated professionals such as Mohammad Ehsai, Nasrollah Afjehei, Khosro Khosravi and Koorosh Shishegaran but also upcoming contemporaries such as Negar Varasteh and ShimaEsfandyari.
The Opera Gallery Group, with founder Gilles Dyan at the helm, and curators Leila Varasteh and Vida Zaim have been actively involved in promoting Iranian art across the globe. With their years of experience and well-developed networks in the country, they were able to gain access to unique pieces of work that make up the upcoming exhibition.
The ‘Art of Iran’ exhibition will be held from March 19th to April 11th at Opera Gallery, DIFC.

[LOS ANGELES]
Iranian Artist Now Part of MOCA’s Permanent Collection
The works of celebrated Iranian artist, Ali Banisadr, will officially go on display from February 10 – March 11, 2013 at the Museum of 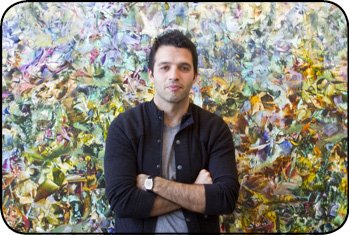 Contemporary Art, Los Angeles (MOCA) as part of the museum’s permanent collection exhibition entitled A Selection of Recent Acquisitions.
Ali Banisadr’sIt’s in the Air (2012) was gifted to MOCA by ThaddaeusRopac. The Day of the Last Judgment (2009) by ShojaAzari will also be displayed during the month-long exhibition. Safe Haven (2011) by Shiva Ahmadi will be exhibited in an upcoming recent acquisitions exhibition that opens in March. Both works were gifted to the museum by Leila Heller and are now a part of the museum’s permanent collection as well.
Banisadr’s works are housed in prestigious public collections worldwide including the Metropolitan Museum of Art in New York, Museum of Contemporary Art in Los Angeles, the Saatchi Gallery and the British Museum in London, among others.
www.ali-banisadr.com