WASHINGTON, D.C.—The Air Line Pilots Association, Int’l (ALPA) honored United Airlines Capts. Christopher Behnam and Paul Ayers and First Officer Ed Gagarin with the prestigious ALPA Superior Airmanship Award for their skillful efforts and resourcefulness in addressing an uncontained engine failure over the Pacific Ocean. The award was presented during ALPA’s 65th Air Safety Forum in Washington, D.C.
“Capitalizing on years of training and flight experience, Capts. Behnam and Ayers and First Officer Gagarin underscored ALPA’s long-held assertion that the best safety feature on any aircraft is well-trained, highly experienced, and qualified pilots,” said Capt. Joe DePete, ALPA president. “Their skilled efforts in safely landing a damaged aircraft demonstrated true professionalism and is a testament to how pilot training and experience make aviation the safest form of transportation in the world.”
On Feb. 13, 2018, United Airlines Flight 1175 departed San Francisco International Airport bound for Daniel K. Inouye International Airport in Honolulu, Hawaii, with 363 passengers and 10 crewmembers. Less than an hour from the destination, the aircraft experienced a fan-blade separation in the right engine and, ultimately, the loss of the engine’s cowling.

Capt. Behnam, with more than 30 years of experience flying for United Airlines, and his copilot, First Officer Paul Ayers, who has since upgraded to captain, were joined by First Officer Gagarin, who was occupying the flight deck jumpseat, when approximately 40 minutes from landing, an extremely violent and loud bang was heard followed by severe vibrations that were felt throughout of aircraft.
Immediately, the three pilots worked together to maintain control of the aircraft amid deafening noise and significant vibration, with neither the autothrottle or autopilot available. Capt. Behnam hand-flew the aircraft while working swiftly with First Officer Ayers to assess and verify the situation.
Utilizing the extra pilot on the flight deck, Capt. Behnam instructed First Officer Gagarin to go back into the cabin to assess the right wing and engine. Gagarin returned to the cockpit with a picture that clearly showed catastrophic, uncontained engine failure. The crew surmised that the massive damage was most likely causing disruption of airflow, resulting in the noise, vibration, and control problems. 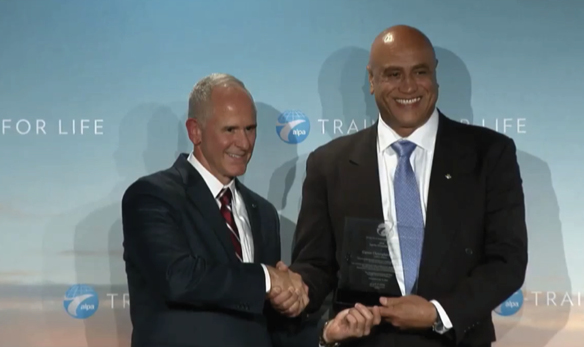 The crew confirmed that Honolulu International was the best airport for an emergency landing based on time, distance, familiarity, and available resources and advised air traffic control of their decision. Breaking out of the clouds at 2,500 feet, the aircraft was lined up for a visual approach on the airport’s longest runway and, ultimately, touched down safely. No injuries were reported, and except for the right engine, the plane sustained only minor damage.
“Capts. Behnam and Ayers and First Officer Gagarin demonstrated superior airmanship that makes all ALPA members and professional pilots industrywide proud. The training and experience each called upon when it was most critical, as well as the exemplary way they conducted themselves during a truly unexpected situation, are the definition of what this award celebrates,” said Capt. Todd Insler, chairman of the United pilot group of ALPA. “The successful outcome of Flight 1175 highlights the importance of having well-trained, highly skilled, professional pilots who can work together to respond to emergency situations.”
Founded in 1931, ALPA is the largest airline pilot union in the world and represents over 62,000 pilots at 35 U.S. and Canadian airlines. Visit the ALPA website at alpa.org or follow us on Twitter @WeAreALPA. 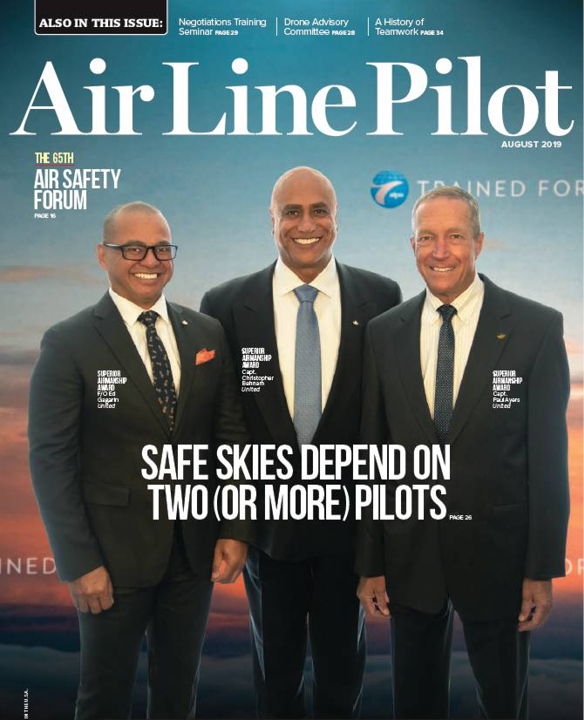