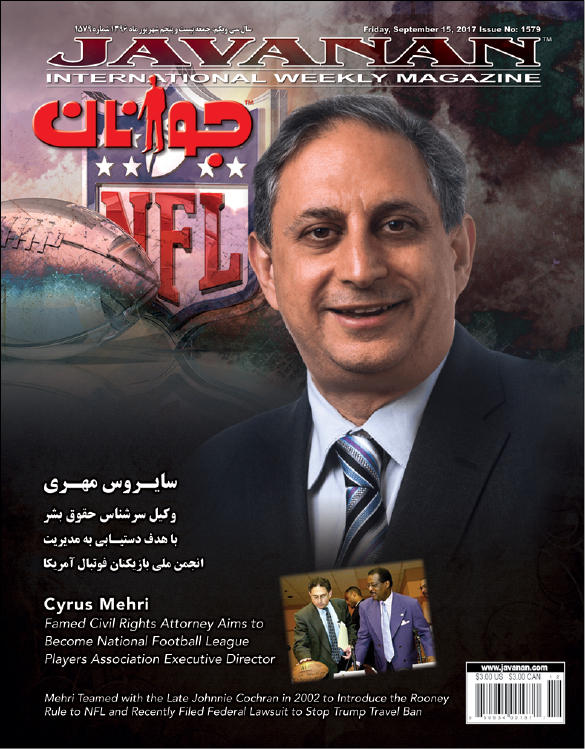 Civil Rights Attorney Cyrus Mehri, this week’s cover subject, has started a campaign to become the next Executive Director of the National Football League (NFL) Players Association. Mehri has history with the NFL — along with partner Johnnie Cochran, Mehri introduced the Rooney Rule to the NFL in 2002. The Rooney Rule called for the mandatory consideration of minorities during the interview process and hirings of NFL coaches and general managers. It has been adopted in many forms by such companies as Facebook, Uber and Pinterest.
Below is an interview in which Mehri discusses his role in the federal lawsuit against the Trump Travel Ban.

WASHINGTON, DC – Cyrus Mehri is a prominent Iranian American civil rights lawyer known for litigating cases involving discrimination, civil and consumer rights, and corporate fraud. Mr. Mehri recently represented PAAIA in a federal lawsuit, Pars Equality, et al v. Trump, challenging the Trump Administration’s Travel Ban Executive Order.
Mr. Mehri graduated from Cornell Law School in 1988, where he served as Articles Editor for the Cornell International Law Journal. Mr. Mehri clerked for the Honorable John T. Nixon, U.S. District Judge for the Middle District of Tennessee. In 2001, he was named by Regardie’s Power magazine as one of “Washington’s Ten Most Feared Lawyers” and in 2003, by Workforce magazine as “Corporate America’s Scariest Opponent.”
PAAIA recently interviewed Mr. Mehri about his representation of Pars Equality Center, Iranian American Bar Association (IABA), National Iranian American Council (NIAC), and Public Affairs Alliance of Iranian Americans (PAAIA) — and more than 20 individual plaintiffs, challenging the Trump administration’s travel ban Executive Order.
PAAIA: Please tell us your thoughts on the Trump Administration’s travel ban Executive Order as well as the Iranian American community’s response to this discriminatory measure.
History will show that in a moment of crisis the Iranian American community rose up to stand for civil rights and civil liberties in impressive ways. Iranian American lawyers acting as first responders in a crisis showed up at airports around the country and at all hours to give innocent people harmed by the most invidious form of bigotry counsel and comfort. Court orders were issued to provide individuals legal support. Organically, thousands of Iranian American citizens called U.S. Senators or showed up at the airports to provide moral support.
These Iranian American first responders are genuine American heroes and heroines. The combination of legal work backed up by thousands of protesters may have saved American Democracy and the Rule of Law from an authoritarian moment. You just have to ask yourself what would have happened if those who cherish civic society rolled over and remained silent. Iranian Americans led the way. I could not be more proud. Something else special happened that first weekend. That Sunday, with less than 24 hours notice, we convened a historic meeting in my office. Attending were not only the lawyers coming back from the front lines of the people in crisis at the airports, but the leadership of Pars Equality Center, Iranian American Bar Association, the National Council of Iranian Americans, and PAAIA. Also attending were representatives of the Lawyers Committee for Civil Rights and their pro bono counsel, and retired federal judge U.W. Clemon, a legendary civil rights attorney.
Everyone knew the gravity of the moment – our community was being singled out and targeted and there was no way to fully describe the feeling of endangerment and hurt we felt, especially when you consider all the ways that Iranian Americans contribute to the U.S. in terms of public service, job creation, arts, science and research. I asked everyone in the room to take a page from the civil rights movement and leaders such as Thurgood Marshall who built cases from the ground up ready to go the full distance to the Supreme Court. To my great happiness, everyone agreed to get behind this legal plan and off we went in a united front to file a case ten days later on behalf of the four Iranian American organizations and 25 individuals in federal court in Washington DC.
PAAIA: How has your background as both an Iranian American and an experienced civil rights litigator influenced your representation of the Iranian American community in the lawsuit Pars Equality, et al v. Trump against the travel ban? What you were most proud of during this case?
While most Iranian Americans came to America in the first wave of Iranian immigration – 1960’s and 1970’s – or after the Islamic revolution in the 1980s and 1990’s – my father and my uncle actually came to America in 1947 – kind of like the Mayflower for Iranians. My father became educated here and became a doctor from Washington University in St. Louis. After he graduated, he went back home and met my mother in the late 1950’s.
Meanwhile, my mother attended American University in Beirut, a very prestigious university in the Middle East. While she didn’t do anything radical, she did speak her mind by advocating for democratic values and against the authoritarian regime of the Shah to her friends like any college student would. What she didn’t know was that Savak was tracking everything she said and when she got back home she was banned from leaving Iran. Ironically, my mother faced the first Travel Ban but from the Shah not from President Trump. Fortunately, my father met with the authorities after they got married, and they both were able to come to America and cherish its freedom, democratic principles, and educational opportunities for their children.
So valuing America, its history, its civil rights traditions is deeply imbedded in my family values. Three of my cousins volunteered to serve in the Armed Services for a total of about 20 years, another cousin served as a senior physicist at NASA creating the laser instrument sent to orbit and photograph Mars up close, and another cousin has served on the faculty and research department for over thirty years at the Navy Academy. We have given back to the U.S. through public service. Fortunately for me, I have had the great privilege of fighting for equal opportunity and civil rights in federal courts around the country as kind of a private attorney general. I am quite proud that one of the inspirations for the Founding Fathers for both the Declaration of Independence and the First Amendment Establishment Clause was the first human rights declaration, the Cyrus Cylinder. The actual cylinder was not discovered until the mid 1800s, but the ancient Greeks wrote about it in depth in the book called Cyropaedia. Inspired by this book’s description of the Cyrus Cylinder’s principles, Thomas Jefferson championed the idea of religious tolerance and the protections of one’s personal beliefs – the first clauses of the First Amendment. He was so fond of the book he gave copies to his grandchildren and a copy he annotated sits in the Library of Congress, walking distance from the federal courthouse where our case is being litigated and even closer to the U.S. Supreme Court. I find this richly ironic. I am proud that Jefferson turned to Iranians for inspiration of core human rights principles and in turn, I firmly believe he would be proud of Iranian Americans for standing up to protect these principles today, the very principles that Jefferson’s generation risked their lives and fortunes for to give birth to this great nation.
Jefferson also said that every generation has to stand up to fight to maintain these principles. Our turn arrived on January 27th, 2017.
PAAIA: How has Pars Equality, et al v. Trump, united the Iranian American to protect the community’s interest in fighting back against the Travel Ban?
One long term benefit of the Pars Equality case is that it has caused the most prominent Iranian American organizations to work together in unprecedented ways. We have set an example for future generations. Regardless of the outcome in court, we can use this as a springboard for more unity in action going forward. Trump’s misguided actions has made our community stronger.
PAAIA: Please tell us about the outcome of Pars Equality, et al v. Trump, its importance to the community, and whether or not you believe this case will set a precedent for future civil rights cases?
There are many unique aspects of the Pars Equality case. We have developed a more robust record than in most of the other Travel Ban cases, with four organizations and 25 individuals coming forward as plaintiffs. Our case has more of a civil rights and national origin focus than other cases and presents the best opportunity to finally overturn the notorious Korematsu case (the Japanese internment case). In my humble opinion, we have developed the record in a way consistent with what legal giants like Thurgood Marshall would want us to. It’s no wonder that the Trump administration has tried so relentlessly to slow down our case and accelerate other cases.
Pars Equality is the only travel ban case that had an evidentiary hearing. PAAIA’s Dr. Leila Austin provided powerful history on the Iranian American immigrant group on everything from our contriibutions to America to the rising tide of hate crimes aimed at Iranian Americans since the announcement of the Travel Bans.