DOMESTIC VIOLENCE AND ABUSE IN THE FAMILY

PSYCHOLOGICAL PERSPECTIVES
A SOCIOCULTURAL AND MIND AND BODY OUTLOOK

In this column, we examine the mental health issues in the context
of social, culture, and physiological concerns of the Iranian community 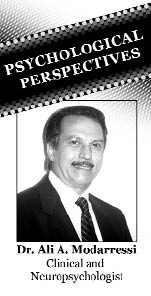 PSYCHOLOGICAL PERSPECTIVES
A SOCIOCULTURAL AND MIND AND BODY OUTLOOK

In this column, we examine the mental health issues in the context
of social, culture, and physiological concerns of the Iranian community

Last week, a general overview of abuse in the family was presented and we examined some of the social and familial factors that can contribute to prevalence of child abuse in a society. Research on the characteristics of the abusive parents indicates that not all abusive parents suffer from deep psychological problems. In fact, many such parents abuse their children due to lack of parenting skills or inability to deal with chronic stress of raising their children. For example, dealing with difficult children requires more parenting skills than a newly wed couple may have to offer. Also, many parents lack adequate problem solving abilities in order to deal with the stress of raising children.

However, while some abusive parents may be psychologically healthy, most are not. For instance, research consistently indicates that as children, most abusive parents were themselves victims of abuse. Conversely, as adults, not all abused children turn into abusive parents. In fact, less than 15 percent of those who were abused tend to abuse their own children.

Abusive parents often engage in chronic negative interaction with their children. That means they tend to avoid positive responses and rewarding behaviors for the good deeds of their kids and have infrequent or inconsistent warm and affectionate relationships with them.  Moreover, they tend to exercise excessive and inappropriate forms of verbal and physical control.

More importantly, parents should know that children are not harmed by abuse only. The can also be harmed by neglect. Neglectful parents actively avoid interacting with their children and ignore their needs for love and attention. Neglectful parenting can harm the kids psychologically and physically.

Parents’ behaviors toward their children are based on their perception of the children’s behaviors. Abusive parents tend to have inaccurate and distorted views and poor judgment of their kid’s behaviors. Such erroneous perceptions can lead to excessive and unwarranted punishments. For example, a parent may expect an eight months old child to follow directions and behave appropriately. Therefore, punishing that little child for crying too much may seem very reasonable to that parent. Many abusive parents perceive their children’s misbehaviors as deliberate attempts with negative intention and engage in a power struggle with them.

Such abusive behaviors can be reinforced and maintained by the consequences of ongoing punishment. In other words, if the child stops misbehaving once the parent uses verbal or physical abuse, that parent will feel justified to continue such punishment on a regular basis. In fact, these parents may feel very effective and even be proud of their parenting skills with no awareness of the negative consequences on their children. They may even believe that use of excessive punishment (that may not even seem excessive to them) is very necessary and is the only way to control the child’s unwanted behaviors. Such parenting methods, however, often cause the kids to feel more frustrated, angry, and impulsive which reinforces more misbehaviors by the child, followed by harsher discipline by the adult.

Research shows hat most abused children tend to develop hostility and aggressiveness toward others. This is more apparent in their interactions with authority figures such as their caregivers or schoolteachers.  They get upset easily and often manifest angry outbursts over minor events. They are also more likely to engage in power struggles and fights with their schoolmates.

The neglected children on the other hand, avoid aggression and feel very distressed by it. Most neglected kids tend to be withdrawn, passive, have difficulty dealing with challenging tasks, and lack interpersonal skills.

In general, maltreated children are also vulnerable to cognitive and intellectual deficits and developmental delays. Many of them fail to learn to talk at appropriate age and may acquire learning disorders or develop below average I.Q.

Mutual understandings between parents and children coupled with effective and open communications as well as love and emotional support are important ingredients for healthy development of a child. It is also important to always reinforce and encourage positive interactions among family members. Positive and close relations among extended family systems that include grand parents, cousins, nephews and nieces, etc., can also help lower the effects of maltreatments on children.

In conclusions, if faced with child abuse, it is important to consider all related factors such as environmental and parental characteristics as well as social and cultural issues. Some rearing practices that may be regarded as harsh or unfair in one society may be customary and even dignified in another. For example, expectations of girls assuming more household responsibilities than boys are accepted cultural practice in some societies. However, for immigrant families living in the United States preserving such traditions may prove to be increasingly difficult. Trying to over-control your children can lead to frustration, anger, and rebelliousness. On the other hand, encouraging them to make independent decisions by learning from their own mistakes can facilitate development of better reasoning and judgment abilities that will enable them to make better choices in their lives.