I was scheduled to interview professor Abolghassem Ghaffari for Javanan Magazine and Radio, but unfortunately he passed away before our interview.
Dr. Ghaffari was a scientist and legend, and had earned worldwide acclaim for his significant contributions to the world of knowledge through his course of life and awarded many times. He received an award from Mohammad Reza Shah Pahlavi, as well as United States President Richard Nixon, and also recently, Sina Hall of Fame 2013 award, from Harvard University for his outstanding achievement.
Every Iranian should be proud of Dr. Ghaffari’s achievements, forever remembered, forever missed.
My deepest sympathy to Dr Ghaffari’s wife Mrs. Mitra Ghaffari, his lovely daughters Ida and my friend Vida Ghaffari: hold tight to memories for comfort, lean on your friends and family for strength, and always remember how much you are cared about.
Farah Shokouhi

Dr. Abolghassem Ghaffari
Renowned scientist Dr. Abolghassem Ghaffari, who had taught at Harvard and Princeton Universities, passed away last week in Los Angeles. He was 106 years old.
In the early part of his career, he was Albert Einstein’s colleague at the Institute for Advanced Study at Princeton University under the direction of J. Robert Oppenheimer. On October 12, he was honored at Harvard University for his lifetime achievements.
Born in Tehran in 1907, he was educated at Darolfonoun School (Tehran). In 1929, he went to France and studied Mathematics and Physics at Nancy University, where he took his L-es-Sc. in Mathematics in 1932. After obtaining post-graduate diplomas in Physics, Astronomy, and Higher Analysis, he obtained in 1936 his doctorate from the Sorbonne (Doctor of Sciences with “Mention tres honorable”) for basic research on Mathematical Study of Brownian Motion.
Dr. Ghaffari lectured as a Research Associate at King’s College (London University), where he received his Ph.D. from the Mathematics Department on the “Velocity-Correction Factors and the Hodograph Method in Gas Dynamics.” As a Fulbright Scholar, he worked at Harvard University as a Research Associate to lecture on Differential Equations and to continue his research on Gas Dynamics.
He Was a Research Associate in Mathematics at Princeton University, and at the Institute for Advanced Study; he worked in the early 1950s with Albert Einstein on the Unified Field Theory of Gravitation and Electromagnetism. J. Robert Oppenheimer, who headed the U.S. atom bomb program during World War II, was director of the Institute at the time and interviewed 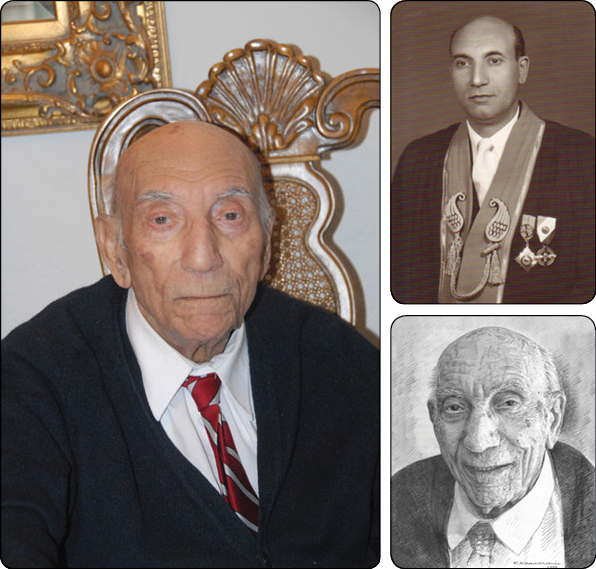 He had lectured as a Professor of Mathematics at American University in Washington, DC and at Tehran University, where he joined the Faculty of Sciences and was appointed full Professor of Higher Analysis from 1941 to 1956.
In 1956, Dr Ghaffari moved permanently to the U.S. to take up a position as a senior mathematician at the U.S. National Bureau of Standards.
In 1964, three years into the manned space program, he joined, as aerospace scientist, the National Aeronautics and Space Administration (NASA) Goddard Space Flight Center, where he studied the mathematical aspects of different optimization techniques involved in the Earth-Moon trajectory problems, and different analytical methods for multiple midcourse maneuvers in interplanetary guidance.
He was awarded in Iran the Imperial Orders of the late Mohammad Reza Shah Pahlavi, and the U.S. Special Apollo Achievement award (1969) at a White House ceremony with President Nixon. He published more than 50 papers on Pure and Applied Mathematics in American, British, and French, and Persian periodicals. In addition to two textbooks, he is author of the mathematical book “The Hodograph Method in Gas Dynamics” (1950).
He is also a past member of the Iranian National Commission of UNESCO.   Dr Ghaffari was a Fellow of the New York Academy of Sciences, the Washington Academy of Sciences, and the American Association for the Advancement of Sciences and a member of the London Mathematical Society, the American Mathematical Society, The Mathematical Association of America, and the American Astronomical Society.
In lieu of flowers, his one wish was to have a scholarship in his name for young Iranians studying Mathematics or Science. Details on the scholarship will be soon announced.