A CHAT WITH ANDY 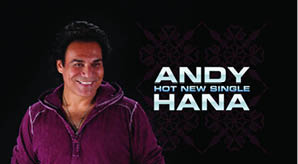 He’s released over twelve solo albums and countless number one singles since I first heard him when I was just a little girl. He is known to people around the world who don’t usually listen to Persian music, as the Persian Elvis”. Now with the release of his new single, Hana, I catch up with the handsome, wavy-haired Andy to find out what’s behind the song, what he’s been up to since I last talked to him, and why music is is for everyone.
“Hana is a love song. It’s simply about a boy who loves a girl,” Andy explains when I ask him what the song, which was released last Friday, means. “I wrote this song for a girl who lives in Europe, which is a true story. ” Despite my questions, it’s all he’ll say about it.
What makes Hana such a special release in not just the mystery behind the song, but that it’s the first time an artist has released two completely different versions of same single, simultaneously. One is a club version, an entirely different music arrangement, by Ehsan Kholeghi, and the other is a pop version by Pooriah Niakan –both are written, produced and performed by Andy with lyrics by Paksima. 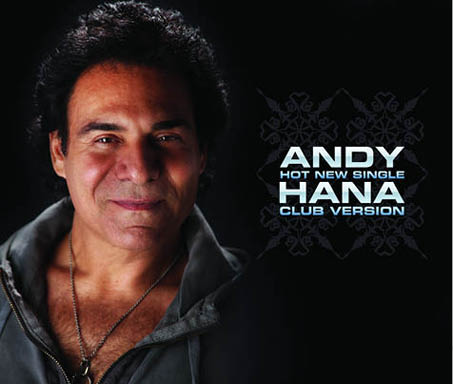 It’s been twenty years that Andy and Paksima have been working together.  They have produced tons of number one hits, mostly love songs, which are usually about Andy’s life. “She knows when I’m sad or happy, so it’s mostly autobiographical.”
“For example when my mom died, she wrote lyrics about that,” referring to the song Madaram. “It’s one of the reasons we think the music is so successful, because people believe it. They can tell I’m feeling what I am singing.” Fellow artists would agree. When Andy was on stage Guitar Center a couple of years ago, Lionel Ritchie compared him to Michael Jackson. It’s no surprise then that he would collaborate with American pop singer Jon Bon Jovi on a single, A Farsi/English version of Stand by Me. The video, which features the two recording the song in a studio, has had over 7 million views on YouTube. Not an easy task.
Part of his success, is his ability to connect with his audience. Between concerts, Andy and his band are still are frequently hired for private parties and weddings in major cities such as London, Dubai, Istanbul as well as cities in Canada and the USA. He says that not every successful singer can do private performances, no matter how big they are. “In private parties, you’re wearing tuxedos and you behave like a wedding band. You don’t come out like a rock star doing a big concert; people are there to see the bride and groom. You have to make the party elegant.” What also makes him stand out from other bands is that Andy covers every popular American song that comes out, so they perform half the songs in English.
“I’ve been here a long time, I am also educated in music here so it’s very easy for me to switch [to English],” he explains.  I remember seeing Andy at a couple of weddings, with his signature smile and joy illuminating him when he performs. I wonder if he would sing at mine. And then, to my delight, he says, “I’ll sing at your wedding! ”
Andy is enthusiastic to begin the tour again, each one with the song Hana. He says he had been waiting for a long time to bring a song like this out. It’s also broke their own records on internet music downloads. Although, excited about its success, he has a mixed reaction to music downloading.

“Obviously free downloading is killing the Iranian music market,” he explains. “As an artist you always want people to have your music in any way. We know kids in Iran can’t buy it legally, so they get it where they can. Outside of Iran, kids can buy it legally, but sometimes choose not to. “
It’s the challenge of being a producer and an artist that causes some conflict. If music was only purchased instead of downloaded for free, his record company would have more to work with for video and concert production, which he believes would please the fans in the long run.
He doesn’t dwell on it too much though. Andy says, “In the end I’m still a happy person because as an artist. I make music and I want people to hear it and I go to a far country and people know my songs. People like songs I wrote. That’s what matters to me. “
It also keeps him humble along with what his fans say their music means to them. Parents will come up to him and say that their one year olds insist that they bring his CD with them everywhere they go. Some even admit that their kids learned Andy’s name before their own dad’s.
“It’s unbelievable because these kids don’t understand the lyrics, or music, but they hear something in it that they like. It’s not about bragging, it just makes me happy.”
Grandmas like him, too. They even approach him to give him kisses on his cheek. According to Andy, in pop music, you have your niche usually. At times, the generation before you is too old to understand and the one after you is too young. Clearly, and I am an example, this is not the case with Andy. His concert-goers range from age one to ninety-nine.
Andy is now preparing for his fall tour that begins in Austin next week. From there it’s Europe, to the Middle East, to Las Vegas for Christmas, and finally New Year’s Eve in Glendale.  He’ll be performing his favorite hits as wells as the new songs he’s just released, including singles Pooneh and Hana.
And Andy is all about the love. “There’s no political connotation in my music. I’m just sticking to my love songs.”