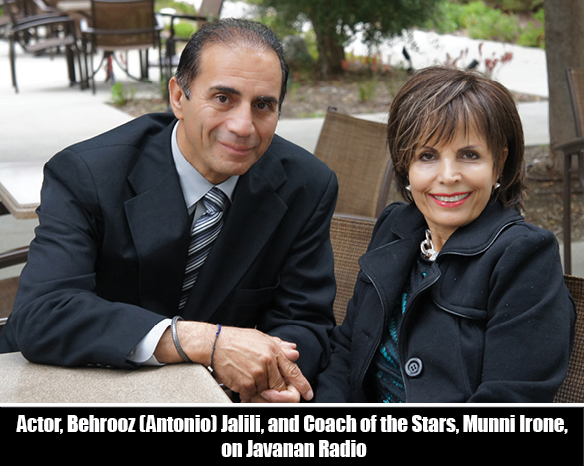 Munni is consultant for Hollywood celebrities, an international motivational speaker, an accomplished writer, and a television Director. She has already appeared at the Family Film Awards / Olympia Awards and will attend the Family Film Awards and Olympia Awards this year at the Universal Hilton. The nominated movies will be sent to us while several art companies, television channels, and the judging committee will be announced.
We have known Behrooz for many years. Recently he has focused all of his efforts into opening a library as a resource for the Iranian community At the same time, he also opened a fine dining Iranian restaurant and a cultural center. His true desire was to open a movie theater. Fortunately, his unstoppable drive was successful. The opening premiere of the theater featured Behrooz himself reciting poetry to the audience.
Behrooz has always been adamant to contribute anyway he could to bring a positive awareness of the Iranian community into the American society. These days, his whole day is filled by his contributions to the Iranian community, like his poetry recitations in the evenings and his hard work is reflected in Javanan International Weekly Magazine. He is so humble anytime he consults with Javanan’s editor-in-chief about his innovative activities. Behrooz is on the right track to present perfect work. He eventually was able to move the Family Film Awards / Olympia Awards to their new location.
His debut began with his cooperation with Dick Clark and was attended by all the outstanding celebrities that were nominated for the awards. Behrooz Jalili, nick named Antonio, will take the stage to express his appreciation to the audience on June sixth at the Universal Hilton. After years of hibernation, the Family Film Awards and Olympia Awards will reemerge to once again acknowledge the wonderful films that have been nominated. From the very beginning in 1980 to current, Behrooz has focused on his center in Westwood, but after thirty six years, he is finally drawn to the global scene. His plans have attracted 175 countries to attend the Family Film Awards and Olympia Awards. It is worth mentioning that we are honored to have him and his assistant at Javanan Radio. His dedication to his plan is unbreakable. Allen J. Freedman is his mentor and a partner in his ambitions.

Munni Irone is a philanthropist, a humanitarian, and a benevolent woman. Her career as a consultant and coach for the elite celebrities of Hollywood is just a small sample of her work. She is an engaging motivational speaker all around the world, a highly praised author of several books, and a TV director. She has assisted Behrooz in improving his twin foundations (Family Film Awards and Olympia Awards).
As soon as Munni arrived at Radio Javanan Studio, we quickly realized that she not only speaks English, but also is fluent in Spanish and French. She is an intriguing writer and highly sought coach for the Hollywood celebrities and many prestigious businesses and corporations. As a coach, her emphasis is in their skin care, energy levels, and elevating her client’s spirit. She schedules their meditation, provides a nutritional diet, and a daily exercise routine. Munni’s strong bond and close relationship with Hollywood has been a great asset in her assisting Antonio Jalili to realize all of his goals for his two foundations, Family Film Awards and Olympia Awards. Munni is also involved in dozens of charities.
She is very discreet, she knows all the secrets in Hollywood, but will not disclose any of the celebrity’s secrets or confidential information to anyone. Munni respects their privacy and their desire to live a hassle free life. Munni is very honored to work in cooperation with Antonio Jalili. She says he is a nice person with all manners and she admires his focus on humanitarian issues, just like herself. After practicing meditation for thirty nine years, her focus for the past ten years has been on harmony between body and soul. She believes in love, affection, kindness, humanity, and forgiveness. Munni teaches others how to lead a life filled with peace of mind.
Behrooz admits he is awestruck and so excited to know Munni. He believes he owes her because he has benefited so much from his friendship with this fantastic woman. Her insight has helped his career be successful. Behrooz said he has trusted Munni since their first meeting. He invited her to join the Board of Trustees for his foundations, and soon afterward, she maintained communication with him. Behrooz asserted that Munni, as an international speaker, saw his well intentions and his humanitarian values, and spared nothing to help his cause. Our main office in Beverly Hills is seeking people like Ashkan Tabibnia to assist with the goals of our valuable mission. By the grace of God, we are definitely confident and honored to have these people join us on June 6, 2015 at the Universal Hilton.