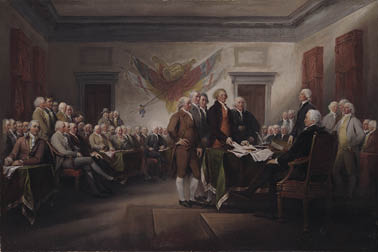 The United States Declaration of Independence is a statement adopted by the Continental Congress on July 4, 1776, which announced that the thirteen American colonies then at war with Great Britain were now independent states, and thus no longer a part of the British Empire. Written primarily by Thomas Jefferson, the Declaration is a formal explanation of why Congress had voted on July 2 to declare independence from Great Britain, more than a year after the outbreak of the American Revolutionary War. The birthday of the United States of America—Independence Day—is celebrated on July 4, the day the wording of the Declaration was approved by Congress.

The sources and interpretation of the Declaration have been the subject of much scholarly inquiry. The Declaration justified the independence of the United States by listing colonial grievances against King George III, and by asserting certain natural rights, including a right of revolution. Having served its original purpose in announcing independence, the text of the Declaration was initially ignored after the American Revolution. Its stature grew over the years, particularly the second sentence, a sweeping statement of human rights: 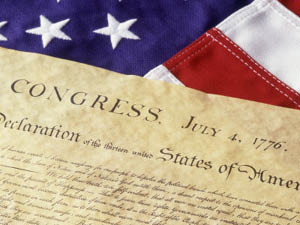 We hold these truths to be self-evident, that all men are created equal, that they are endowed by their Creator with certain unalienable Rights, that among these are Life, Liberty and the pursuit of Happiness.

This sentence has been called “one of the best-known sentences in the English language” and “the most potent and consequential words in American history”. The passage has often been used to promote the rights of marginalized groups, and came to represent for many people a moral standard for which the United States should strive. This view was greatly influenced by Abraham Lincoln, who considered the Declaration to be the foundation of his political philosophy, and promoted the idea that the Declaration is a statement of principles through which the United States Constitution should be interpreted.

Believe me, dear Sir: there is not in the British empire a man who more cordially loves a union with Great Britain than I do. But, by the God that made me, I will cease to exist before I yield to a connection on such terms as the British Parliament propose; and in this, I think I speak the sentiments of America.

By the time the Declaration of Independence was adopted in July 1776, the Thirteen Colonies and Great Britain had been at war for more than a year. Relations between the colonies and the mother country had been deteriorating since the end of the Seven Years’ War in 1763.

The war had plunged the British government deep into debt, and so Parliament enacted a series of measures to increase tax revenue from the colonies. Parliament believed that these acts, such as the Stamp Act of 1765 and the Townshend Acts of 1767, were a legitimate means of having the colonies pay their fair share of the costs to keep the colonies in the British Empire.

Many colonists, however, had developed a different conception of the empire. Because the colonies were not directly represented in Parliament, colonists argued that Parliament had no right to levy taxes upon them. This tax dispute was part of a larger divergence between British and American interpretations of the British Constitution and the extent of Parliament’s authority in the colonies. The orthodox British view, dating from the Glorious Revolution of 1688, was that Parliament was the supreme authority throughout the empire, and so by definition anything Parliament did was constitutional.In the colonies, however, the idea had developed that the British Constitution recognized certain fundamental rights that no government—not even Parliament—could violate. After the Townshend Acts, some essayists even began to question whether Parliament had any legitimate jurisdiction in the colonies at all.[1 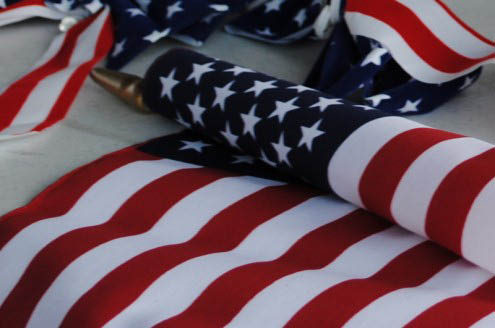 Anticipating the arrangement of the British Commonwealth, by 1774 American writers such as Samuel Adams, James Wilson, and Thomas Jefferson were arguing that Parliament was the legislature of Great Britain only, and that the colonies, which had their own legislatures, were connected to the rest of the empire only through their allegiance to the Crown.