The Queen And I 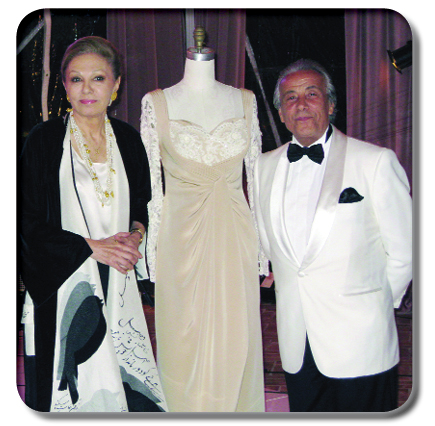 The Queen And I

Dear Editor,
You asked me to write about Her Majesty Farah Pahlavi’s visit to Los Angeles for your magazine, which is read by many of our fellow countrymen everywhere. I didn’t know how to write because I am not a writer, but since I admire the magazine’s journalism and I respect the Queen of my country, I would like to share with your readers a few valuable memories of meeting her.
Once again I witnessed the beauty and grace of the Queen of Iran as she visited my home, my boutique and while she spent time with my family. Because of my line of work, I often meet with Royal families and Presidents of various countries. I must say Her Majesty Queen Farah Pahlavi’s greatness is not comparable to anyone. Her humility and her sincere love towards her admirers have always been remarkable. Her Majesty has always been very kind to me. I enjoyed hearing her talk about her son and her daughter-in-law.
I have always respected Princess Yasmine, she is very intelligent and humble. Her Majesty’s visit to Los Angeles left me with a positive energy. God bless her. At a private charity party to help raise funds for the children of Iran, I had the privilege of purchasing one of the Queen’s donations, a beautiful dress that she wore at an official ceremony. (I am so lucky!)

AT MY HOUSE
At home everyone was so excited because the Queen was visiting us! Everybody was trying to get the house ready for the Queen’s arrival. The previous night during the fundraiser I invited Her Majesty to visit my humble home.
When she arrived, her serenity and elegance were everywhere. She was wearing a beautiful handmade Iranian dress. Princess Yasmine, her daughter-in-law, accompanied her.
My children, who were all born in the United States, were dressed for the occasion and this time my son was wearing a tie. My daughter rushed back from college so as not to miss this important event, to hug the Queen of her father’s country. Mahtab, Manijeh and Mozhgan brought wine and cake, but Her Majesty refrained from both.
After some time, it was whispered to Shahbanou that she had to leave to attend another charity event. When her visit ended, we were left with extreme happiness and joy.
This wonderful occasion brought back old memories. I am certain that she was aware of my deep respect for her husband, His Majesty, the late King of Iran. It is my honor that he was my King, may God rest his soul…. IN MY BOUTIQUE
25 years ago, when I was living in New York, the security guard at my Fifth Avenue boutique approached me and told me that a lady wishes to tour your showroom, (we were by appointment only). “What would you like me to do?” he asked. When I walked to the front to greet the guest, only God knows how I felt. Like the famous saying, it takes a Shakespeare to describe how Hamlet felt. I was seeing my country’s Queen in the Unites States, right in front of me with my own eyes. I expressed my gratitude and how proud I was that she was there.
After that occasion years have passed. On the day when Her Majesty visited my boutique in Beverly Hills, I welcomed her and her family wholeheartedly. I expressed my appreciation of having the privilege to know Her Majesty’s children. Their visit brought so much excitement and pleasure to my staff, who were filled with joy. With much excitement I showed her all of my designs. I was worried that she might become bored so I tried to keep her interested and gain her approval. I asked her if I could have the pleasure of offering any of my designs to Her Majesty. With patience and calmness, Her Majesty said that she would take only a few scented soaps and candles for her collection and expressed that she liked my latest fragrance.
The famous French designer, Azzaro’s credibility hit the roof when Shahbanou Farah chose and wore a beautiful cream colored dress he designed for the spectacular wedding of Greek Crown Prince Pavlos. That dress complemented my queen’s beauty a hundred times over.

FOR MY DAUGHTER
Alexandra Persia Pakzad, my gift to my daughter who I love. These were her last days of college for this year. She would see Iran’s Shahbanou for the first time. She was in awe of this lady’s humbleness and grace. I told her that she would have the privilege of wearing the dress that I had the honor to purchase at the fundraiser. I had attained personal permission from the Shahbanou for my daughter to wear the dress. This was such a tremendous excitement and immense honor for my daughter, that for a moment she forgot herself!!!
A picture was taken of my daughter in Shahbanou’s dress with me at my Rodeo Drive boutique, which I’m dedicating to Shahbanou.
I’m very appreciative of Her Majesty’s permission to allow my daughter to wear her dress!
This is a great honor…