Sitting in her spacious New York City studio, Afsoon Talai, an Iranian American graphic designer in her mid-20s, tells me about how she left the world of high end New York City design to create her own company, with an Iranian twist.

Talai, a graduate of the prestigious Rhode Island School of Design, decided to leave the world of magazine design at InStyle and high-end event design at Fete, in order to create Golreezan, an Iranian-American design brand. Since launching her business nearly one year ago, Talai has created stationary, apparel, magnets, stickers and now, Persian alphabet blocks for Iranian American babies.

“My goal with Golreezan is to create design products for Iranians in the diaspora that ties in their Iranian heritage,” Talai says, showing me the hand-made stationary and children’s products the company has become known for.
“Besides children products we have new apparel, greeting cards, invites, stickers, magnets, and a whole array of products for Iranian children growing up in diaspora.” 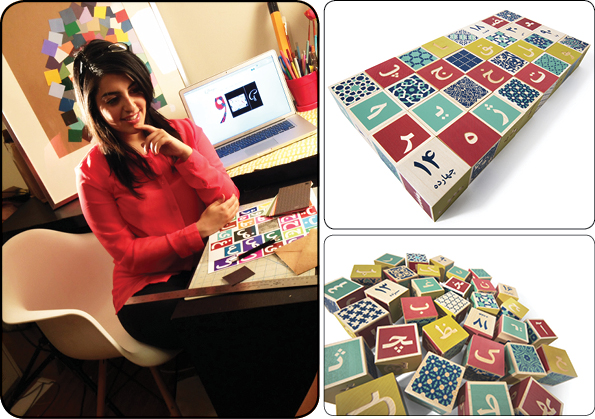 Talai’s most exciting new product is her Persian alphabet blocks. In creating these first-ever Persian alphabets blocks, Talai teamed up with Uncle Goose Toys, the world’s premier manufacturer of wooden alphabet blocks, to create a new toy for Iranian American toddlers and children. Handcrafted from sustainable FSC-certified Michigan basswood, this 32-piece block set features the full Persian character set, numbers and a side of intricately reproduced Persian geometric patterns. All pieces are made with non-toxic, child-friendly ink, and Uncle Goose has produced these blocks for 19 other languages; Persian being their 20th language.

“When I was leaving for a trip to Iran last year, a family friend who had a one-year old baby asked me to bring back alphabet blocks in Persian and other toys for learning for her child,” says Talai. “After going to numerous toy stores in Iran, I noticed that there really were not any Persian blocks nor learning material toys that would be suitable for children growing up in the diaspora.”

After returning from Iran, Talai contacted Uncle Goose, a world-renown toy manufacturer, and they partnered up to create the blocks in Persian.

“I want to create design savvy learning products for Iranian children growing up in diaspora,” says Talai. “I didn’t have any of this material myself growing up in the South in the U.S., and I know there’s a need out there for this.”

Golreezan’s new product contains 32 blocks, highlighting the Persian alphabet. The blocks show each letter in its different forms: detached, initial, medial, and final, allowing children to correctly spell the words they want. The blocks also have numbers in Persian, as well as intricately reproduced Iranian geometric and floral patterns.
“My hope is that the artwork on the blocks will be an introduction to children of Iranian artwork and design patterns,” Talai says.