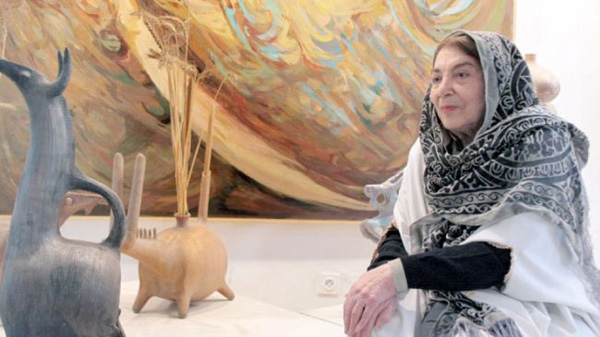 Veteran Iranian painter Mansoureh Hosseini passed away in her home in the capital city of Tehran this past Saturday. She was 86.

Known for her modernist style of art with incorporated contemporary European and Persian culture, Hosseini was hospitalized at the Critical Care Unit of a Tehran hospital and later died in her home. She had been suffering from a heart disease for a few years.

Hosseini was alone in her home and had been deceased for approximately two weeks until her body was discovered by neighbors. Information on funeral processions has not been announced.

When Hosseini was only 10, she drew a pine tree from her garden, prompting her father to hire a painting tutor. She made her debut in 1949 at the Anglo-Iranian Cultural Society, and graduated in Painting from the Faculty of Fine Arts in Tehran. She left Iran for Italy in 1954 to continue her studies, exhibiting her works in several group and solo exhibitions. Hosseini was known for both figurative and abstract approaches in painting, depicting landscapes and portraits in her work. Her works often included elements of Kufic script, and is considered to be experimentalist.