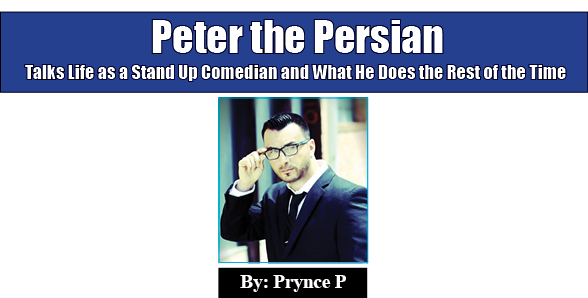 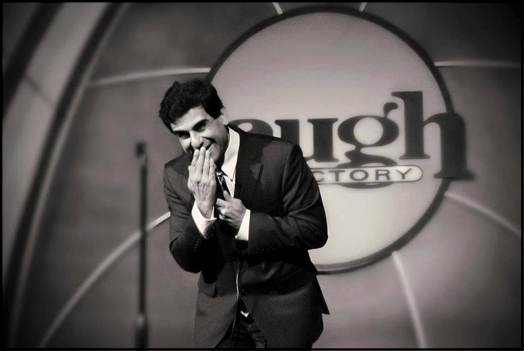 Prynce P:  For those who don’t know you, could you introduce yourself?
Peter: I’m Peter Shahriari, otherwise known as Peter The Persian. I’m Persian, like my father before me. My favorite food is potato, I have my own hair (including on the chest) and I am a sucker for kind women not named Sara Jen or Lauren.

Prynce P:  How did you get involved in comedy?
Peter:   I had to settle a bill one day at a comedy club and they were out of comics for the night. And, people over the years in K-12 told me I am funny.

Prynce P:  I have noticed that you are also a lawyer. To me, what’s interesting is that most lawyers are usually serious, how do you juggle the two?
Peter:  Juggle, jiggle, finagle, yes, I’ve done it all. They are actually two sides of the same coin: comedy and tragedy. To be honest I’ve got a lot of flak from the comedy peers for being a lawyer, and admiration from lawyers for being in comedy. Says a lot about comics and attorneys. They both require a lot of the similar skill set: public speaking ability, networking craft, and ability to perform while intoxicated.
Prynce P:  I see that you have toured with some great comics.  Do you have any upcoming shows?
Peter:   Yes, but none with great comics. Just me.

Prynce P: I just have to say that I love your name, how did you come up with it?
Peter:    It was something that popped into my head back in 1995, it evokes ideas of an ancient conqueror, or some historic figure, and it’s funny at the same time. I believe in marketing and getting what you pay for, this name covers all that. And, I let people know I’m Persian, because they otherwise would not be able to tell.

Prynce P:  Where can the fans learn more about you? Do you have an official website?
Peter:  If they want to know more about me, I suggest they message me on Tinder. That’s where I am most honest. Otherwise they can add me on facebook to get updates on shows and a peek into my personal life, which I am very happy to share.

Prynce P:  What are some upcoming projects that you have?
Peter: I am working on an untitled project about my dual life as an attorney and comedy. Stay tuned.

Prynce P: What is your ultimate goal with comedy?
Peter: I have not yet seen where it can take me. It would be nice to plan it all out, but that’s not life. So far the best part of doing comedy has been the warm and memorable comradeship of my peers, the satisfaction of making thousands smile and laugh, and of course, the free alcohol and women.

Prynce P: “Heyvoon Estyle”? [Laughing]. Any last words my friend?
Peter:  “Et tu brutus?”
Prynce P: I don’t know why but I have been laughing since the first question.  Peter the Great, you are my idol and I wish you the best.  Thank you for having this interview with me!