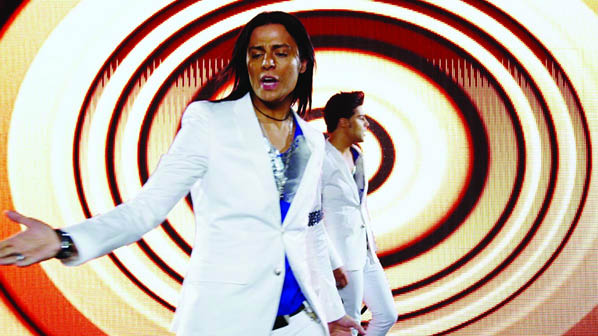 Hooman’s album Shenasnameh on billboards across Los Angeles to promote its success. The first one is up on Ventura blvd, across Reseda blvd. in Encino, the other one will be up early December on Santa Monica blvd. and Westwood blvd.
The latest single “Behtarini” has become a huge hit worldwide including in Iran and the United States.  Behtarini held the #1 spot for many weeks on top 20 music video charts on PMC. It has had over 1,300,000 unique online hits.
Shenasnameh is the duo’s first album with all new songs in over six years, since their debut album 20, released after their departure from pop group Black Cats.
The music of “Behtarini” was done by Kamran & Hooman, lyrics by Maryam Heydarzadeh, and produced by Payam Shams. The video was directed by Siros Kerdouni, edited by Alex Ferra, produced by Allan Buenafe, and Armin Hashemi (Avang Music) was Executive Producer.
www.kamranhooman.com
facebook.com/KamranHooman
For booking: 818-990-6200