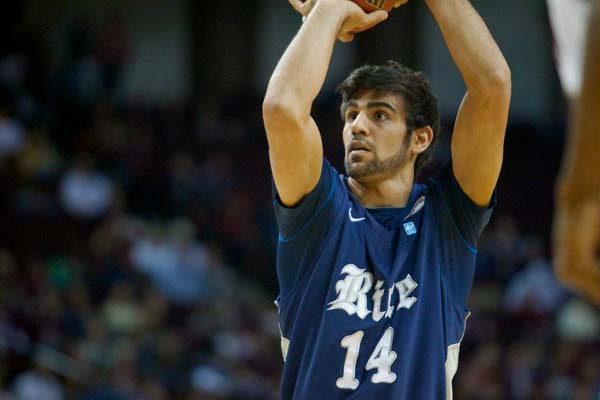 HOUSTON — Rice University forward Arsalan Kazemi, the 1st Iranian-born Division 1 basketball player ever, has decided to return to the Houston school for his senior season despite receiving positive feedback from the National Basketball Association’s undergraduate advisory committee. The UAC gauges where underclassmen would be selected if they declared for the league’s annual June draft.

The 21-year-old Kazemi, arguably the second-best Iranian basketball player in the world behind Memphis Grizzlies veteran center Hamed Haddadi, had until April 29 to declare for the NBA draft.

“I received some positive feedback from NBA general managers and evaluators,” Kazemi explained. “Some of them said that I was ready and would be at least a second-round pick, and some others told me that there are some areas that I could work on and improve in order to raise my draft stock for 2013. I will take that feedback and work on my game this summer and next season, and come back more ready that I am now with the hope that my position in the draft will improve.”

The 6-foot, 8-inch Kazemi, who projects as a small forward in the NBA, has mostly played out of position in his first three seasons at Rice, anchoring the power forward and center spots for head coach Ben Braun. He has received assurances from the coaching staff that he will have the opportunity to spend the majority of playing time at the small forward position as they transition 7-foot-2 Egyptian center Omar Oraby, a junior, into the starting line-up.

Conventionally, underclassmen stay in school if they are not projected as 1st-round draft picks. Every NBA team is entitled to one pick in each of the two rounds of the draft. First-round picks receive guaranteed contracts for a minimum of two years, while 2nd-round picks receive virtually no guarantees.

Despite being hampered by a lingering knee injury since early in the season, the Esfahan-born Kazemi averaged 12.1 points and 10.3 rebounds and shot nearly 60% from the field in 2011-2012 while leading the Owls to the quarterfinals of the College Invitational post-season tournament. He was named to the All-Conference USA 2nd team and is a leading contender for C-USA Player of the Year Honors next season.

Kazemi has been among the Div. I national rebounding leaders since 2010 and has started for the Iranian national team in the 2010 FIBA World Championships and 2011 FIBA Asia Championships.

JAVANAN EXTRA CONTENT: Check out this CBS television on Kazemi.