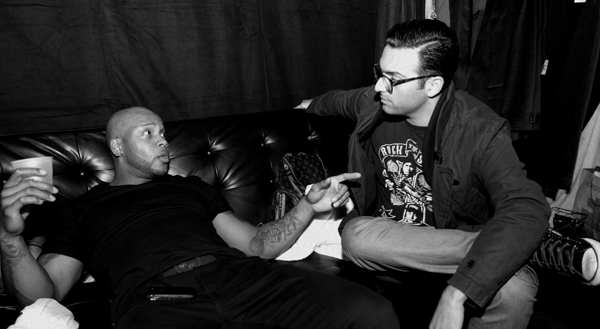 Maddahi and Flo Rida in the studio

Artist Publishing Group (APG), a joint venture with Atlantic Records that is administered by Warner/Chappell Music Publishing and for which the 28-year-old Maddahi serves as vice president, took home plaques for the 2011 summer hit “Tonight” by Enrique Iglesias and Chris Brown’s “Yeah 3x”. Both tracks were produced by up-and-coming hit-maker DJ Frank E, who Maddahi also manages under his Madd Music Management banner. APG also won awards for Nicki Minaj’s “Super Bass” and Lupe Fiasco’s “The Show Goes On”.

ASCAP – formally known as the American Society of Composers, Authors and Publishers – collects licensing fees from users of music created by its members, then distributes the revenue back to them as royalties. Representing more than 425,000 music creators from every genre, the member-owned organization distributed over $824 million to its songwriting, composing and music publishing members in 2011.

Maddahi is the son of internationally revered physician and UCLA clinical professor Dr. Jamshid Maddahi, renowned as a leader and expert in cardiovascular disease research, teaching and patient care. In a previous Javanan magazine interview, Maddahi explained that as an undergraduate student at the University of Southern California in 2004, he had aspirations of attending law school, but his penchant for music – derived from a music management class he took at USC – lead him to the successful path he has undertaken. He noted that this parents’ support of his untraditional endeavors was a catalyst for his success.

Benjamin Maddahi started his career in 2006 under the tutelage of Mike Caren, currently executive VP of A&R for Atlantic Records. He spearheaded his Madd Music Management company in 2007 by signing producer and L.A.- based radio personality DJ Felli Fel.