A CHAT WITH BIJAN MORTAZAVI 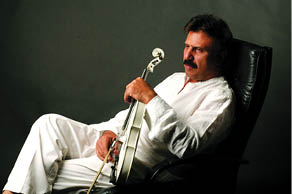 A CHAT WITH BIJAN MORTAZAVI:
The Famous Violinist, Musician, Composer and Singer, Adds Professor to his Repertoire

What have you been up to in the last couple of years in Europe?
As usual, we did touring once a year in Europe. In 2009, I got my PhD from Southampton Solent University in England. I’ve been doing research and teaching courses there, coming back [to the United States] once every month and a half or so.

What have you been teaching there?
The goal is to expand Persian music all over the world, so I’m writing courses to get students in graduate schools and train them. The courses are based on Middle Eastern music and history and it includes Arabic and Persian music.
Middle Eastern music has a tone that other international music doesn’t have and this is what sets it apart from other music.  In the past, it has been difficult to harmonize Middle Eastern music. The course I teach talks about how it is possible to harmonize the music, by eliminating notes to be able to play it in an orchestra.

What do you mean “eliminating melodies?”
The idea is very similar to painting. You use the main subject and build around it. You want to get it to a point where it looks good or it sounds good. Middle Eastern melodies had quarter tones. You can do it in unison so everyone plays the same thing, but it sounds small. Instead, you use the main melody and you build around it.  You have to create a law that makes music better, not worse.
It has to be done in a way that the main melody shines.

What is the course called?
Contemporary Middle Eastern Music and it is for graduate music students.
When did you start working with English or American orchestras?
In 1994, the Greek Theater concert was the very first that Persian artist was studied by an American orchestra. They studied the music for six months. When they finally accepted it, we were able to hold the event at the Greek Theater. We had a 64-piece orchestra. And it was the first time a Middle Eastern singer held a concert there.
That was the first step I took. I had Persian musicians among them. My band always has to be in there no matter what. And I started using the technique of harmonizing at that time and performing with it.

Did you perform a lot in England while teaching?
When I first wanted to introduce this to students, I had to perform for 45 minutes because we have so many different scales in Middle Eastern music, so many different levels. It takes time to talk about it and demonstrate it so they can understand concept.

What cities have you been performing in while in Europe?
London, Munich, Stockholm, Stanford, Istanbul, Manchester, Leeds, Paris-I love Europe very much. People are very cultural and wherever I perform, they give me great energy!

What’s your favorite country to perform in?
It’s very hard to say, but if I had to choose, I would say Spain. I love the country. It’s very close to our culture. They act like us.  The weather is fantastic. And in Marbella, the architecture is reminiscent of ancient Iranian architecture.

What project are you working on now?
I’m working on a film project with Johnny Essapour who is the director and screenwriter. I’m doing the music for the film. It will be all animation.

I’m surprised you haven’t previously done music for a feature film. A lot of your music seems perfect for films, why have you not composed music for films in the past?
As Mr. Zokaei knows, I don’t advertise on my achievements very much.

How is the current album you have out different from the other work that you’ve done?
Before you could say album was successful on how many album you sold. Now you have to see what the response is. At concerts, if people are singing along with you, if your fans are giving you feedback, are people are taking about your music- that’s what it’s about now.  And of all these things I’ve mentioned, everything is great.

How has teaching changed the way you make music?
You step into a level in academic level, so your vision is different. It can affect your work. Everything is changing; you can’t do what you used to do 15, 20 years ago, you have to keep up with what young people like. Hip Hop in rap music has become popular in Iranian music.  I go after what I believe in music, and try to make that new age with new concepts so it can be appreciated by younger market. I have to keep an academic point of view and still be conscious of the commercial aspect.

Has teaching music helped you in a positive way then?
I always say if you want to learn something it’s better to study it-especially, on the academic level. You understand what’s behind it. With musicians and singers, sometimes people play by ear and don’t read music. But when you get to that level a big door opens up to a big world. Listeners learn something too, rather than just enjoying it.

What cities are you performing at here in the United States?
I have a concert in the OC Performing Arts Center October 8. I haven’t performed in OC in so long. We usually do concerts in Los Angeles and count Orange County as a part of that, but it’s totally different from LA and I decided to do it there this time. It’s a fabulous venue. We have a big orchestra, strings, percussion, strings, keyboards and guitars.  We’ll be doing new songs and new compositions.
Mehrnoosh, a young female vocalist, will be opening the show. She is really great and I am always there to support young talented singers.
With his task in the development of contemporary Middle Eastern music in an academic form in United Kingdom and other western countries, Mortazavi will be continuing research to teach more courses. As well as continue making music.
Bijan Mortazavi live at The Orange County Performing Arts Center, October 8, 2011