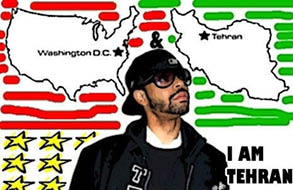 To the 80 Million Iranians living in Iran, January 1st is simply known as “yazdeye Dey” or the 11th day of Dey.  However to the millions of Iranians who are part of the Diaspora living outside of Iran in the western hemisphere it is technically New Years whether we want it to be or not.  Unlike Norooz, which has a great many festivities associated with it, New Years is just that down time from our businesses and the off time from our jobs.

We do enjoy going to parties.  That is an Iranian tradition through and through.  Dressing up and seeing each other, and never ending “mehmoonis” because our parents need one more “chai” before we go.   Iranians definitely know how to party.

Iranians also know how to assimilate.  They take on bits and pieces of every culture that the come in contact with and make it their own.  In the case of New Years it’s the New Years resolution.  Promises we make to ourselves to make ourselves “better” in the New Year.  Most Iranians break these “promises” faster than you can say ab goosht.  Many using the excuses that Norooz is right around the corner and that they will remake (and probably rebreak) them then.

In my infinite observations of the Iranian culture and Iranian people I have taken the liberty of writing down the top 5 most broken Iranian New Years resolutions:

Most Iranian uncles pledge to never drink again after how drunk they get on New Years Eve at Khaleh Aghdases house party.  They do this after swearing they have never ever been that drunk before or that they hardly ever drink even though you remember the previous 10 years in which they have been exactly that drunk if not worse and cannot remember a party/mehmooni/wedding they weren’t drinking.  Who can ever forget the time when Amoo Akbar (dad’s best friend and not blood related tanx god) started taking his clothes off until he had only a hat and his underwear on while he was dancing to Baba Karam even though there was no music playing at all?

Not drinking as much alcohol is always good for you.  It’s good for your health and even better for your wallet (alcohol is quite expensive).  But can you really NOT drink for 365 days a year.  It’s very easy for me someone who has never drank alcohol but for someone that is a frequent drinker quitting cold turkey is very hard.  In social settings people get the wrong idea about you (or the right one) if you just stop drinking.  They pressure you to drink and once you do its right back on the wheel.  Since you promised NEVER to drink again you feel that one drink means you have broken your promise and since you already did that then why not drink the whole bottle again?  Just ask Amoo Akbar.

With all the stress of work and the holidays and business etc. Iranians tend to get even more stressed than the average person during this time of year.  Many Iranians own their own businesses and while many retailers sales go up during this time many Iranian owned businesses go down.  Except of course the Rug Store that has the sign “Bankruptcy Sale” for the past 20 years.  With all the added pressure it’s easy for Iranians to have lots of stress.  What do you expect from a culture that drinks tea even when its 110degrees outside?  Stress is a part of an Iranians DNA.  They stress over their families, they stress over their spouses, they stress over Iran, they stress over what Ahmadinejad wore to the United Nations.  Iranians LOVE to stress.  It’s in their blood.

Not stressing is just not easy for someone that has grown up around it his or her whole lives.  Especially not for a culture that is built on stress.  This is why Iranian men lose their hair at 15.  The first thing they will think when the New Year comes is “Oh my god…its 2012 already???”  “It came so fast.  I close my eyes and poof 2012.  What am I going to do?”  “Is my son a doctor yet???”  And poof the dream of No More Stress is gone as soon as you wake up.

Iranian food is so yummmmm.  With all the rice and the toppings and the smell and the juices and the meat and the butter and the salt and the cholesterol and the fat…  One serving of Kabob has more fat and cholesterol than a vegetarian consumes their whole life.  But we Iranians cant live without it.  Once again it is our nature.  How can you be Persian with out Ghormeh Sabzi or Kabobeh Kubideh?  How would Iran survive without Khoreshte whatever on their plate?  If you ever watch Survivor people win a million dollars for eating things that Iranians eat for breakfast once a week  aka Kaleh Pache.

Eating healthy lasts all of two days in an Iranian household.  The problem is that Iranian moms take this rule too seriously.  They start using corn rice instead of Basmati and Tofu kabob instead of low fat meat.  As soon as the kids and the husband find out that you aren’t using salt or butter on the rice and that a No Meat rule is in place you will learn what the word “talaagh” means really quick.  Another broken promise.

There seems to be two types of Iranians.  The really big ones and the really little ones.  There is no in between.  Even when Iranian men work out they look more like Takhti then Bruce Lee (even though all Iranian men had a million Bruce Lee posters on their walls back in the day.)  You’ve seen that heavy piece of wood exercise that all old Iranian films show.  I don’t know what part of your body it works out but its supposed to work out something.  Well Iranians hate going to the gym unless it’s to look at hot girls at the juice bar.  Iranian girls go to the gym until they get married then they are too busy cooking all that greasy food.  Good thing the women usually have naturally beautiful bodies.  The men on the other hand not so lucky.  How exactly does one get a beer belly without drinking beer?

Everyone wants to go to the gym right after New Years.  That’s why there are so many deals at so many gyms beginning January 1st.  Iranians however do not realize that going to the gym and just owning a gym membership are two very different things.  Ask one and they are quick to say “Areh memberam valee vaght nameekonam beram…” Well then what’s the point?  I understand its just easier to get fatter friends but eventually you should realize that working out isn’t just good for your body its good for you.  If it weren’t for soccer and volleyball Iranians wouldn’t work out at all.  Ps. Buying buildings is NOT a sport.

#1.  No More Smoking
This shouldn’t come as a big surprise.  If there really is an embargo in Iran and 85% of all cigarette products being American made, how is it possible that so many people smoke?  According to the recent census more Iranians smoke than any other group of people in the United States.  Probably because they can afford it.  More probably because in Iran in the 60s and 70s smoking was seen as the “cool and suave” thing to do.  Add in the fact that people think it helps with stress and viola you have a whole country of smokers.  With so many Iranian doctors you would think more would realize how unhealthy smoking actually is.  No Iranian admits they are addicted to smoking they promise they can “quit anytime I vant.”  But quitting smoking is not that easy.

Addictions are addictive.  That’s the whole point.  If quitting smoking was easy a lot more people would do it, there wouldn’t be a billion dollar industry of quit smoking aids, and there wouldn’t be a trillion dollar cigarette industry either.  They create cigarettes with chemicals to keep you smoking.  Only 15% of those who try to quit manage to do so for more than 6months.  Even than many smokers smoke again. The addictive substances in smoking make it even worse to quit.  People go through withdrawal and crave the substances even more.  Many people smoke even more after they “quit”.  The trick is to either never start smoking to begin with OR quit slowly.  Train your body off smoking until you no longer need it.  Many of the quit smoking tools work.  Ps. Hypnotists really don’t.

I hope everyone enjoys their holidays whether you celebrate them or not.  I also hope everyone the best of success and health in the New Year or at least until Norooz.

Not a lesson just a thought.