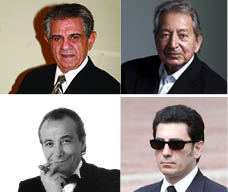 NOT FORGOTTEN:
FALLEN STARS OF 2011 Reza Badiyi was born on April 17, 1930, in Arak, in southwest Tehran. He began as career in Iran as a movie actor and made documentaries. One of them, Flood in Khuzestan, prompted the U.S. State Department to invite him to America to study film. He moved to the United States in 1955 and continued his film studies and got his break when he met director Robert Altman. Badiyi became his protégé and lifelong friend.

He directed more than 430 episodes of television, four feature films, and more than 60 documentaries beginning in 1963. He was regularly directing series television, including Mission: Impossible,” for which he directed 17 episodes, more than any other director. Other notable directing works included “Hawaii Five-O,” “The Six Million Dollar Man,” “The Incredible Hulk,” “T.J. Hooker”, “Star Trek: Deep Space Nine”, “Baywatch” and “Buffy the Vampire Slayer”.

Mary Tyler Moore once said that it was Badiyi who came up with the idea of having her toss her hat into the air at the end of the opening credits of The Mary Tyler Moore Show.

Badiyi holds the record for directing the highest number of hour-long episodes, at 417, according to the Director’s Guild of America. He has been referred to as “the last TV tycoon,” as well as “the Godfather of American television.”
Badiyi is survived by former wife Barbara Turner, daughters Mina Badie, Alexis Badiyi and Tashi Badiyi and stepdaughters Jennifer Jason Leigh and Carrie Ann Morrow. Beverly Hills designer of ultra-luxury clothing, perfume and jewelry, Bijan Pakzad, was known as a designer to some of the world’s most powerful men. His father, a wealthy industrialist, sent him to school in Switzerland and Italy, where Pakzad studied design. For seven years he designed men’s wear in Florence. He opened Bijan after moving to Los Angeles in the early 1970s, which was a by-appointment-only Rodeo Drive boutique billed as “the most expensive store in the world.”
Bijan Pakzad was also known as simply Bijan, as he preferred to be called. He proudly promoted his glamorous life and his famous clientele, with such avenues as billboards on Santa Monica Blvd., showing him beside custom designed jets bearing his name.  In other famous advertisements, he appeared beside celebrity clients like Bo Derek and Michael Jordan, or posing provocatively with nuns and a rabbi.
Bijan was also known for his jewelry and fragrances; the original cost of his cologne was $1,500 for six ounces. He later produced several best-selling versions, recognizable by their doughnut-shaped bottles, and seen on television shows such as “Friends.”  He dressed President Obama, the Queen of England, Ronald Reagan, the Sultan of Brunei, Prince Charles, Bill Gates and many others Bijan is survived by three children, Daniela, Alexandra and Nicolas Bijan. 1935-2011
Known as one of the pioneers of modern Iranian music, Monouchehr Sakhaei was a singer who only performed music that was important to him. In Iran, before he became a singer, he was an established journalist. He studied journalism and went on to write for Kayhan newspaper covering political news. He also starred in several films, one of which was “Postman.” He personally didn’t like to act but wanted to sing and was encouraged to do so. When he entered the music scene, he became competition for other popular Iranian singers.
In Iran, he created and hosted a popular television program to promote young talented artists called “Zangooleh Ha”. The show had much success and showed how much Monouchehr cared to give young talented Iranians a chance to be heard.
He came to the United States in the 1980s, at which time he released more albums. When came to America wanted to keep integrity of work sang meaningful songs. In the United States, he performed concerts with well known performer Vigen. He also performed in international concerts, including in Paris, where he performed with the singer Marzieh.
Manouchehr was also a contributing writer to Javanan Magazine with features on traditional Iranian singers. He was best known as a pivotal figure in modern Iranian music. 1966-2011
Prince Ali Reza Pahlavi was a member of the Pahlavi Imperial Family. He was the younger son of the former Shah Mohammad Reza Pahlavi and his third wife Empress Farah and the grandchild of Reza Shah.  He was second in line of succession to the Iranian throne before the Iranian revolution.

Close confidantes describe Ali Reza Pahlavi as gracious with a militaristic discipline reflective of his royal upbringing. He was once voted as one of the world’s most eligible princes.