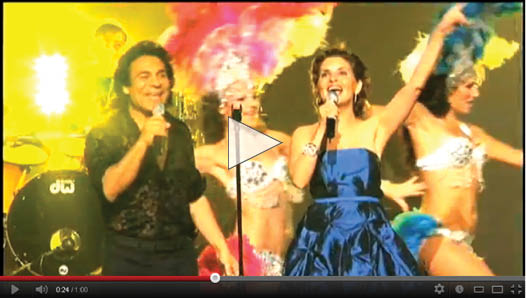 Quite possibly the best the best known Persian entertainer outside of his home country. Bringing matinee idol charisma to the silver screen and concert stage is ANDY, Persia’s legendary music exile known throughout the world as “The Persian Elvis”.  The Iranian/ Armenian American, Andy has released multiple albums selling in the millions throughout the world with countless number one hits.  He has toured extensively around the world many times over playing some of the globes most prestigious venues, theatres and stadiums.  A humanitarian, he has appeared and contributed to many international charitable causes, most recently having recorded “Stand by Me” with Jon Bon Jovi and Richie Sambora to show solidarity with the people of Iran.  The song generated 7 million hits on YouTube.  This year, he was chosen by Voice of America’s Persian Program voted by people as the number one Artist of the Year and number one Video of the Year.  He has been featured along with his music in Hollywood films such as DreamWorks’ HOUSE OF SAND AND FOG and THE KEEPER – The Legend of Omar Khayyam, as well as many other independent films.
Celebrating the star’s sicth return performance to the historic Greek Theater, Andy’s fervid fans are eagerly anticipating his new show which will feature a theme of rhythm and energy.   The show also marks the first public performance of  “We Hear Your Voice”,  a musical message that unites and expresses solidarity with some of the greatest voices of the world.    Pop stars  Ehsan Aman of Afghanistan,   Liel Kolet of Israel, and Sung Bong Choi of Korea have traveled from their native countries to join Andy and Shani  in this performance of a lifetime being filmed for a September release.
Imagine: We Hear Your Voice… an Iranian Pop Star Andy duets with an Israeli Star / Peace Advocate LIEL KOLET … Korean singer SUNG BONG CHOI surged to international success last year when his performance of “Nella Fantasia,” from “Korea’s Got Talent,” went viral with an astonishing 55 million hits on YouTube. Choi’s heartbreaking story was  picked up by the worldwide news media  as an abandoned three year old orphan who through music found his place in the world and is now appearing on the main stage at the upcoming YouTube Festival in Spain. Israeli kibbutz-born singer, Liel who has performed in the White House and has an upcoming PBS special, will be performing along with EHSAN AMAN, a highly acclaimed veteran of Afghanistan’s lost golden age of music.    Despite residing in the United States for roughly three decades, Aman has remained a revered musical legend in his homeland.  Ten year old piano prodigy JAHAN RAYMOND whom critics call “a born again Mozart” will accompany the artists.
The song “We Hear Your Voice” , written and produced by Shani,  is dedicated to the theme of hope and peace.  The sound recording will feature Pop Stars Sonu Nigam of India, Igor Nikolaev and Yulia Proskuryakova of Russia, and others, in addition to the Artists attending the August 4th Concert.    All proceeds from the digital downloads of the song will be donated to improve children’s welfare throughout the world.
Singer/ Songwriter /Actress / Producer  – Shani Rigsbee and her music have been featured in highly acclaimed feature films such as the Academy Award Winning CRASH, the epic  ONE NIGHT WITH THE KING (FOX).  She was chosen as the featured vocalist for  the Mega-hit “Parasite Eve” for Sony Playstation and has contributed and appeared in many  studio and  independent films, and television.  Having an International fan base from her four solo albums, she has toured the globe extensively and played in some of the world’s most exclusive and high profile venues such as The Kennedy Center, The Lincoln Center, The Kodak Theatre, Greek Theatre to Dubai’s Aviation Center.   She has collaborated with and enjoys friendships with many of the world’s top artists.  Also, an Activist, she supports various charitable causes including Women’s Health, Animal Advocacy Groups and International Humanitarian organizations.  She performed and produced musical events related to the Obama Campaign and Inauguration and continues her commitment for social consciousness through musical venture, “We Hear Your Voice”.
www.andymusic.com
www.shanimusic.com