Javanan Magazine: I know you worked with the Middle Eastern community and, like other cultures, are family-oriented so with the Persian New Year just passing, we want to know how family oriented are you. Tell us about your family.
Colonel Scott Peterson: I’m married almost 15 years two kids I have a 13 year old precocious daughter and a ten year old boy. My wife is Korean-American from the southeast and believe it or not we have more in common than most people would think because we’re both very family oriented people. I came from a family that did everything together all the way through high school, I mean we’re always doing things together, I mean grandparents, etc. My wife’s family very much the same in fact she lived with her parents until the day we were married. Very traditional in that sense. And honestly every introduction that I’ve had, every exposure to the Iranian community, there are many similarities; I find more similarities than differences. At the dinner functions and things we’ve gone to, children were there and it was really unique, kind of a blessed thing. You see a very similar care in the next generation for the family network and I relate to it well.
Javanan Magazine: When did you get started in the LA Battalion?
Colonel Peterson: July 20 was my official take over day, my change of command.
Javanan Magazine: What role does Mr. Kermani play in the LA Batallion?
Colonel Peterson: Mr. Kermani is a critical part of our team as has a specific recruiting effort for us. 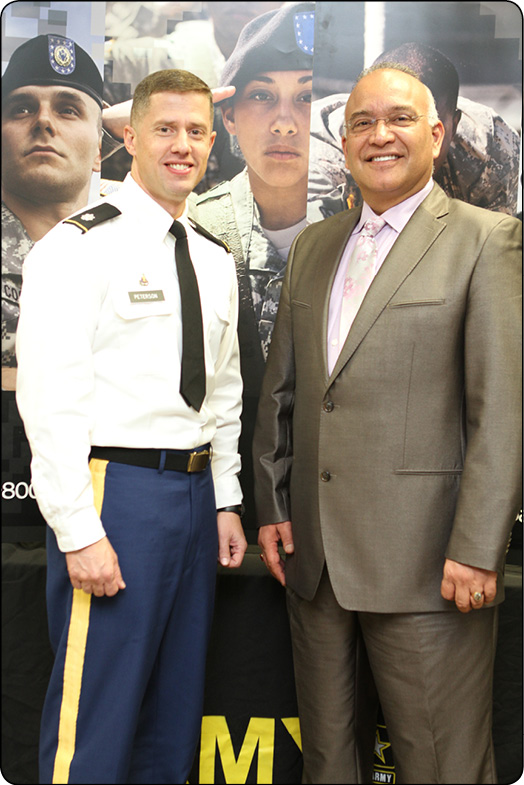 For recruiting, we have a variety of specialties we look for in the military. The Persian community, whether of Afghan decent or other, is a verydesired complement to our armed forces and Mr. Kermani, he is our kind of conduit, our recruiter of sorts to help us in that community. Help us understand their concerns, misinformation perhaps, making sure things are well understand what we are here to do, what we’re not, opportunities for their children. He links to many of the parents and families to ensure that their son or daughter is coming into something that that they fully understand, and agree with, and support.
So Mr. Kermani is that bridge to the community. I got here in July I’m here for a two year tour; a lot of us are here for two-three years. So when you revolve that quickly, having continuity with those a part of the community is very important.
Javanan Magazine: What are some of the misconceptionsthat people may have with the Middle Eastern community in getting them involved?
Colonel Peterson: I think it’s broad for all of the demographics because we are recruiting Chinese Americans , Korean Americans  a variety. But the common one I come across almost all of them is that we aregoing to send their son or daughter out to the front line to be shot at. This fear of a combat role, it’s always there and that is a misperception. We are recruiting men and women to serve as cultural liaisons, not all serve abroad; many that we recruit from the Persian community never leave the states. They are remaining locally to assist in culturalunderstanding perhaps preparing those that may go overseas. There’s a variety of roles that are support roles but again most will default to what they see in the news, the idea that they’re going to have to pull a trigger or be in harm’s way. And that’s just not the case.  I think that’s one of the bigger ones.
The second one is the idea that their young son or daughter is going to go off and have very little support; they’re almost on their own, which is not true. There is a huge network, we take care of those that come in that are married or have kids. Most don’t understand all of the benefits that are packaged with an enlistment particularly those who are married that want to come in and don’t realize all of the programs that support their spouse.  They are part of the army.
And people are unclear that you can serve on a part-time basis in the army. Some do a weekend a month, some are called up on only in times of true crisis. So we help them understand that reality. 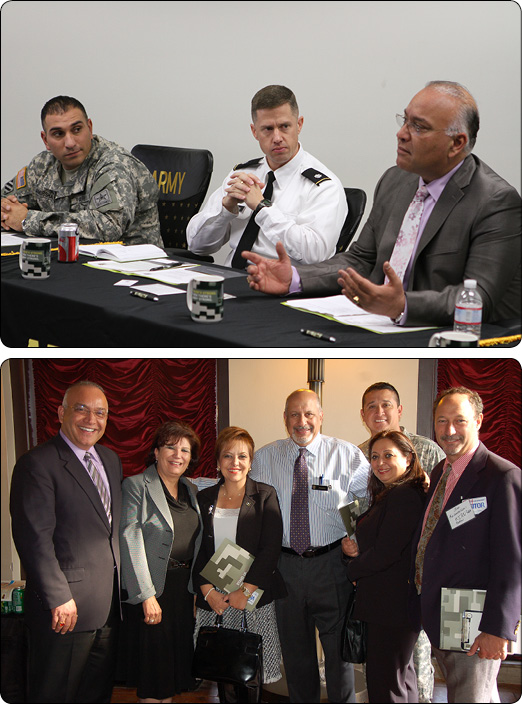 Javanan Magazine: Are their Iranian traditions that you have learned about?
Colonel  Peterson: I guess some of the specific not so much, certainly food. From a cultural experience all the dinners we’ve gone to, the idea of the family traditions and importance of education stand out as I spoke with Iranian-Americans. The family network is what it seems to all come back to and that’s good to see. I respect that.
Javanan Magazine: Why do you need Farsi speakers?
Colonel Peterson: There’s a broad push in the army to bring in a variety of languages and cultural backgrounds into the ranks, and it’s not just Iranian Americans it’s almost every demographic we want represented in the force.  And we’re trying to have to the best of our ability, an equitable ratio for what reflects in the American population looks like in the army.  It’s been an unstated objective to get that level; of diversity in the ranks. I think number one is about that skill set regardless of the job inside the unit. It just makes us better soldiers. It’s something I talked about with agroup a few weeks back. I’ve traveled a few places in the world and we found we are the most successful not when you have someone who speaks that language in the country but when you have soldiers that are sensitive to other cultures and the differences that they may or may not experience. And those who have grown up been in units where they have a Thai speaker, a Persian speaker or families from that background, when you have that eclectic mix of talents and backgrounds, the units were stronger and more adaptable. Their approach is different from the myopic little group that never left their little town kind of things. We don’t want that in the army, we want that diversity.
There are some specific requirements for language, for those who may travel to that part of the world or areas that speak the language. But more importantly is about the diversity is really what we are trying to get at it certainly gets a lot of attention in the news these days and people wondering what we are recruiting for. Truthfully, it’s that simple. If I were to break down all the different languages, and all the different backgrounds, it’s one of any that we try to bring in for that diversity factor if that makes sense. It’s at the core of it.
There is a program that you have probably heardcalled MAVNI [Military Accessions Vital to the National Interest], and we are recruiting those who don’t have citizenshipor green cardsin the U.S. and take those on workvisas or student visas, and give them an opportunity to get citizenship for that very reason. We want that embedded talent in the force.
It’s a pretty unique program in that it emphasizes that diversity.
The army is pretty dynamic. A lot of people don’t realize that but you look inside and you find Russian, Iranian, Cambodian,Chinese, you really find a variety of backgrounds.