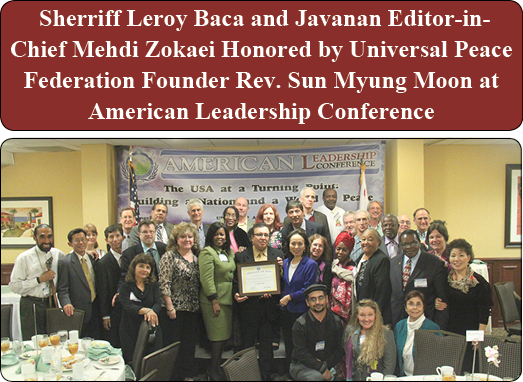 On November 15 and 16, 2013 Universal Peace Federation USA sponsored an American Leadership Conference at the Embassy Suites Hotel in El Segundo.

About 80 – 100 people, mostly community and religious leaders from different organizations, denominations, and ethnic backgrounds gathered together to share their belief that universal peace is possible and to share opinions, suggestions, and analysis how we can achieve peace on a personal, family, community, national, and universal level.

UPF USA and several panelists offered presentations based on the teachings and implementations of UPF’s founder Rev. Sun Myung Moon and created an atmosphere of peace, friendship and one global family centered upon God. During the conference the UPF representatives and participants made conscious efforts to break down all the historical barriers among the participants.

Sheriff Leroy Baca, a well-known figure in the greater Los Angeles area, joined the conference on Friday, November 15 for dinner and blessed us with inspirational remarks that truly touched everyone’s heart. He explained his spiritual view on how much God invested in creating man and therefore we need to love ourselves, and feel gratitude for our existence and abilities; that each human being regardless of background, religion or other definitions deserves respect and dignity.

The conference participants received so much inspiration from the Sheriff, insights into Rev. Sun Myung Moon’s vision, encouragement from each other, and expressed the need for more conferences and their desire to work with UPF in the future.

Two young speakers added further energy and emphasized the need for interfaith and intercultural activities to help future generations. Many answers to today’s problems are to be found in education, protecting and upholding family relationships and in improving our connection and communication with our youth in order to empower them and give them courage and hope to improve our society through caring and living for the sake of others.

Mr. Nasser Zomorod, Director of Universal Peace Federation in Southern California who worked tirelessly to organize the event for the last month and helped greatly to create this unforgettable experience, brought a great number of guests together and was supported by national headquarters.

Mr. Mehdi Zokaei, the Chief Editor of Javanan Magazine with more than 280,000 publications a week, was recognized as a journalist with a long history of popularity among Middle Eastern people in America, Iran, Canada and Europe. Mr. Zokaei was also appointed as Ambassador for Peace and received his Certificate for his achievements in helping people to achieve peace in their life, and said that he wanted to continue on his path to be even more of a bridge of communication in helping the Iranian Community to be understood by each other and by non-Iranians.

Nasser Zomorod contributed to this article