THE ART OF FIFTY 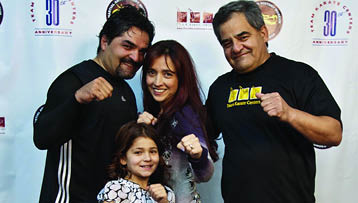 Last Saturday, Fariborz Azhakh woke up early like every other Saturday, except for one thing.
Today he would fight fifty people.
In an event coordinated by his karate-kicking wife Nina, Fariborz, who holds a seventh-degree Hapkido blackbelt, would celebrate his fiftieth year sparring in one-minute rounds with martial arts teachers, students and friends at his Team Karate Centers studio in Woodland Hills, Ca. I asked him how he felt turning fifty and he says, “To be honest, I was feeling great. Then I woke up that morning thinking, ‘What did I walk into?'”. He laughs.
He started at 9am and sparred ten people, every hour, for five hours. Many of his students came in and watched him that day, even sparring him. They also came to watch Fariborz take on some of the most respected martial arts figures in the world including Grandmaster Tae Joon Lee, Sensei Cecil Peoples, Sensei Pete “Sugarfoot” Cunningham, Master Steve Sexton, Sifu Ron Balicki, Diana Lee Inosanto, Sensei Ash Ladjevardi, Shihan Morteza Laborzi, Master Mohamad Jahanvash, Master Simon Rhee, and Master Nicolas Saignoc. Each one represented a different style of karate.
“That day was to represent humanity more than any other martial arts system,” Fariborz says, “It’s about humanity first before it’s about Hapkido or Tae Kwon Do or any other style. Fighting is most primitive way of communication.
“That day, we showed love to each other through martial arts.”
There’s no doubt that it was a physically exhausting day, and Fariborz admits he broke two fingers. What kept him going strong were the words of mixed martial arts pioneer, Sensei Benny “The Jet” Urquidez, who coached Fariborz between rounds.
“If it wasn’t the coach I got from Benny, who was there to keep me present, I don’t know what I would’ve done. He would say every time I was about to spar another person, ‘This is round one’ and I would say that it wasn’t round one, I’ve been fighting all these other people. Then he said that this is round one for them.”
He even had a sparring round with wife Nina, which he considers a highlight of the day, as well as a round with daughter Laila, who is 8, another highlight.  He woke up to a note that Laila left for him, which he says meant the world and was better than anything anyone could’ve given him that day.
To fight so many people in such a short time, I have to ask if he actually feels like he’s fifty. “We come from a culture where fifty is old. For me, it’s a paradigm shift. I’m thinking it’s not old and I feel better. I’m a lot smarter, a lot healthier. No matter what I am doing in life, I always come back to martial arts, it’s what I love.”
Fariborz currently teaches at his Team Karate Centers, which has been open for 30 years and has nearly 400 students. However, the road was not always an easy one for him. When he moved to the United States at the age of fifteen, he didn’t know a word of English. Despite the language barrier, he graduated from the University of California, Los Angeles, but had to wait tables for a while before living out his dream of studying martial arts.
When he finally did begin to study and was doing well as a red belt, the studio he studied and assisted Steve Sexton in, was to close. This didn’t get Fariborz down; in fact he made an offer to buy the studio, making payments over the next few years with the money he earned waiting tables.
After years of facing obstacles such as experiencing all of Sexton’s students leave the studio when he took it on, changing locations, and being sent home after his first lesson with Grandmaster Ji Han Jae (though he says that was a valuable lesson and continued to study with him for ten years), Fariborz never gave up.
It’s as if he always knew in his heart the words that Benny “The Jet” was telling him on his fiftieth birthday: “the work begins now.” Every time he was faced with adversity, he worked harder.
Fariborz explains that there was a study where parents were asked what they want for their kids, and they responded that they wanted for them to be happy. Yet, he doesn’t agree.
“The truth is you don’t learn through happy,” he says. “Pain is a part of life. Adversity is what makes you strong.”
He explains the samurai sword and how it’s a symbol for life. “The more the samurai sword is pounded, the better the sword. I’ve made every mistake there is; that’s what makes me stronger.”
What keeps him so young at his age?
He says, “Being centered. My kids center me. I appreciate the basics.
“You know, I’ve always tried to be a good teacher. With my kids, they don’t listen to me, they watch me. I constantly have to set a good example, but that’s what keeps me going. Truly being a good example. And as far as exercise, I used to exercise to look good and now I want to exercise because I want to be around a long time.
Fariborz has three children with wife Nina: Laila, 8, Aria, 7, and Katana, 2, whose name means samurai