The Worldwide Olympia Awards of Cultures …

On Saturday Dr. Gellini who was invited to dinner by the Rockefeller family met with his friends Michael Jenkins (president of the Universal Peace Federation), and the renowned Chairman, World Chinese Arts Counsel and artist of Mr. Huang Yue along with friends Steven and Kimberly Rockefeller and other distinguished members of the Rockefeller Family within the Rockefeller home at New York and we got some great pictures to go along with the great news!
Where to begin? It has been a tremendous and fascinating three weeks.
It all began with a special dinner gatheringheld by the Universal Peace Federation at the Peace Palace,(the World Class Peace Education Center Las Vegas NV) on June 16, which was followed on Saturday June 22nd by the gigantic and celebrated “Peace Begins with Me” rally which boasted an appearance by True Mother herself who gave an inspirational talk and marriage blessings as well.She was attended by a crowd of 10.000 persons who were wowed by True Mother and by the event. Dr. Gellini is Global Advisor and Liaison, appointed by the Universal Peace Federation of the United Nations in the capacity and scope of world cultures and arts, Dr, Gellini is Founder and Chairman of the renowned World Film Institute which originally was backed in partnership with Tichi Wilkerson Kassel (Tichi was Founder of the Wilkerson Foundation and of the original Hollywood Reporter) and she partnered up with Dr. Gellini then as honorary Chairwoman Emeritus for the World Film Institute (and) Dick Clark, (founder of Dick Clark Productions) which produced along with founder and co-producer Dr. Gellini the original Family Film Awards telecast which aired live on CBS Network August 22nd, 1996 to a worldwide audience of over 700 million households… making the show to this date the most watched family film television awards show in all of television history .
The World Film Institute is a California based 501(c)3 educational organization promoting the cultural arts, artists and entertainment globally with offices in several nations. True Mother has shown gracious hospitality to Dr. Gelliniand has pledged support for the World Film Institute, the Family Film Awards and Olympia Awards Competitions of Cultures, Arts, Artists and Entertainment, the World Film Awards and our many other quality educational programs.
On July 6th Dr. Gellini boarded a plane from Los Angeles for New York City as Mr. Jenkins had invited him to view the fabulous NYC Studio Facilities which will be used to facilitate broadcast nationwide live Olympia Awards Competitions of Cultures, Arts and Entertainment events as well as to broadcast the World Family Film Awards (switching live from broadcast studios located in Los Angeles to the studios in New York City) and then live to a world audience as was done with the original Family Film Awards. 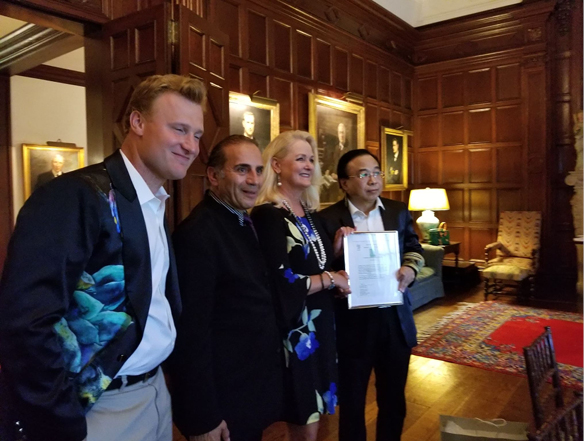 While in New York City Dr. Gellini had another very special meeting he’d been scheduled to attend. He’d been invited to dinner with Kimberly and Steven Rockefeller and several Rockefeller family members at the Rockefeller home. Also invited were Dr. Michael Jenkins and Mr. Huang Yue Chairman World Chinese Arts Counsel, New York., who is appointed Co-Chairman for Olympia Awards Committee and we wish him all the greatest success along with warm congratulations. Dr. Gellini wishes to extend his sincere thanks to the Rockefeller family, to True Mother and Dr. Michael Jenkins, to Mr. Huang Yue and to all persons who are involved and who are so warmly supportive of the World Film Institute and of the cultures, the arts and family entertainment worldwide.